Will we meet in person?

Hi guys. I just met someone via Facebook and was instantly attracted to him. He's a friend of an acquaintance of mine who does live videos on political issues on FB, so they both went live this time together and that's how I saw him. He's from a different country and just moved here, but to a different state where that acquaintance lives. It was an instant attraction for me, so after I said hi under the FB live video to both of them, he liked my new photo a day after that as I had sent him a friend request during their live video where my acquaintance was mainly introducing his friend to his audience.

I did send him a message telling him welcome to the US during the live. He messaged me too, but our conversation started to get active two days after when he liked my new photos and messaged me again this time per his own initiation. We've been talking since then for 4 days and for several times a day. In fact, we are on the phone until very late at night. For me, I can say that it's an instant attraction to him not only physically, but mentally too. It's like I've known him and feel very close to him. It's extremely rare for me to have such a vibe with anyone.

His friend wants him to stay in his state, but the man I like told me that he might get a job in my town/state and also wants to see me. I'm currently going to be away from the US until beginning of December, so we won't see each other before that, but my acquaintance and him also invited me to their state for a mini vacation later on. I'm not sure who will travel to where to see each other after I'm back from my long overseas trip, but my question is whether we will see each other this year?

The thing is that we spoke for a few days, but haven't spoken since Sunday afternoon and today is Wednesday already. What happened is that all was good until he called me via messenger as he always does but this time to do a video chat for the first time, which I would have appreciated if him or anyone else asked first if it's convenient for me to do a video chat. I was in bed and in my random clothes and no make up, as a woman didn't feel too excited about the video call lol. Also, with phone calls in general, I always put the calls on speaker phone to do stuff on the side while I'm talking, so I feel weird holding a phone to my face to do a video chat. Not to mention that I hate how I look on selfies up close and don't feel like doing video calls with men as I look much much better in life than on a video. So I told him that my connection isn't great and asked him to call on my phone instead of the messenger video call, then he insisted on a video call by calling again out of the blue and I felt really annoyed so I told him my phone is dying I need to get it charged first. He said call me once you charge it, but I did not as I thought he would want to do a video again so that was Sunday. I also thought that he would just call in the evening himself on my regular phone number. He did not call me, so not sure what now since it's been 3 days of no contact. There was no argument or anything...we just stopped communicating at that moment on. My ex husband loved randomly doing video calls and I really hated it. I really don't look close to how I look in real life and, in this situation, I would rather him see me in real life or at least give me a heads up about wanting to do a video calls so that at least i won't be in bed at that moment. Not sure how long this silence will last either as perhaps he is waiting for me call, but im hesitant for some reason. I dont even know how to properly explain that I don't like doing video calls as that might seem weird for some people. My ex husband thought it was weird not want to see him on a video calls since we lived in different countries at that time.

Regarding the chart, I see our significators trining and also the moon will sqaure my significator although not until it squares sun. Any thoughts on this chart please? 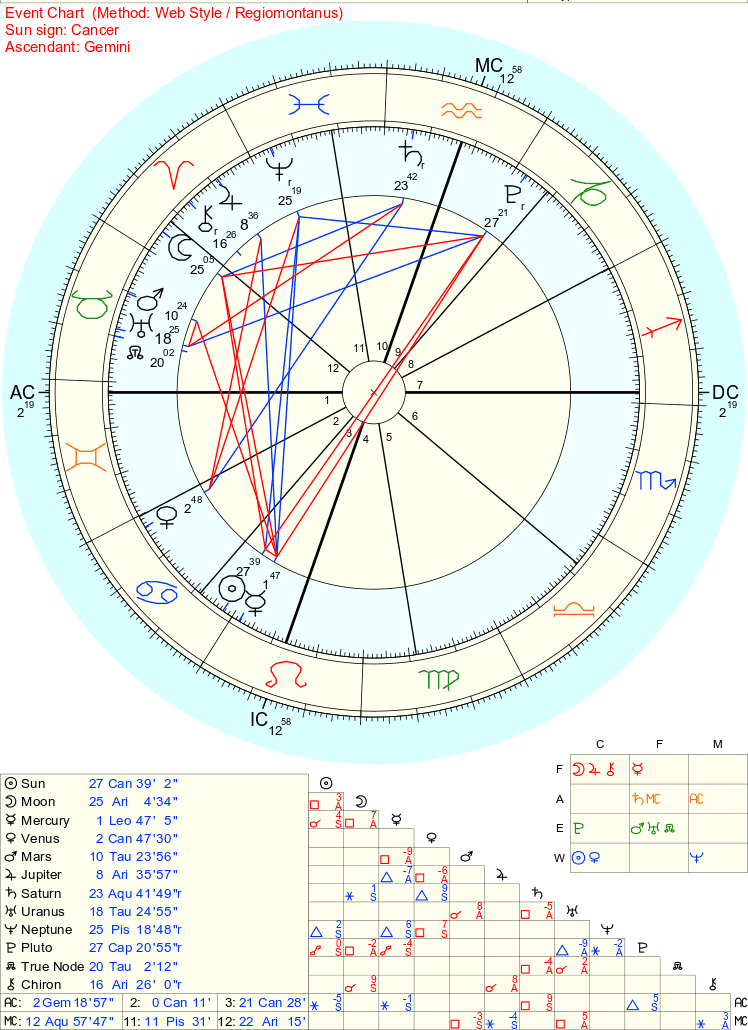 He thinks you are catfishing him. No chart necessary
K

conspiracy theorist said:
He thinks you are catfishing him. No chart necessary
Click to expand...

and which significator shows that lol

Premium Member
I think you may meet. You as Merc, the faster planet and so the more interested, apply to trine him/Jup.
Bumpy start with Moon square Sun. But mutual reception between them is powerful.
I am not sure you will like him since no reception whatsoever from you/Merc to him. He likes you with Jup receiving Merc by triplicity and term. Merc and Jup are 6-7 deg apart which lines up with your being gone until the end of the year.
The rising point is very early. Things are premature. You can see what relying on instant attraction tells you. Most often, not much .
K

IleneK said:
I think you may meet. You as Merc, the faster planet and so the more interested, apply to trine him/Jup.
Bumpy start with Moon square Sun. But mutual reception between them is powerful.
I am not sure you will like him since no reception whatsoever from you/Merc to him. He likes you with Jup receiving Merc by triplicity and term. Merc and Jup are 6-7 deg apart which lines up with your being gone until the end of the year.
The rising point is very early. Things are premature. You can see what relying on instant attraction tells you. Most often, not much .
Click to expand...

Thanks hun! After my divorce, he's the first man I liked so wanted to see how things will progress between us as I have almost forgotten about ym ex husband. Yeah..the bumpy ride agh. I freaked out for his video call very much. I wish he had asked if it was ok for him to video call me at least I would have said in half an hour that I was busy at that minute or something this way I would have gotten dressed and dried my hair lol after shower. I feel embarrassed texting him for so many days that has passed which is 5 days now, but glad that there’s a chance for us to meet as that’s the best outcome. My face looks really riding on **** iPhone cam and I never do selfies for that reason but in life I’m different so I didn’t want him to see me on a video call first, but in real life instead. I always appreciate your input and I will update when we meet
Share:
Facebook Twitter Reddit Pinterest Tumblr WhatsApp Email Share Link
Top