Why do I attract overly possessive and stalker-ish partners according to my chart?

Why do I attract partners who gradually end up being possessive and stalker-ish according to my birth chart? I am a guy by the way 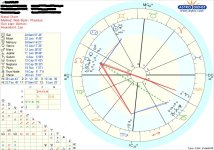 Sorry to tell you but the image is blur. Can you give me your birthtime and place.
T

EsmerSilver said:
Sorry to tell you but the image is blur. Can you give me your birthtime and place.
Click to expand...

Hi, I adjusted the photo of my chart

If it's women, it's your Moon square Pluto.
E

Yes, moon square pluto, in the 12th. An addition, the ruler of the 5th of love affairs is Jupiter, also ruler of the 8th of sex, and also in the 12th, conjunct mars, opposite Saturn and squared pluto. In addition, the 5th holds Uranus and Neptune, fascination but also abrupt explosions and delusion. Love affairs are destined to end badly for you apparently. The 7th of marriage is ruled by Saturn, co-ruler of its house sign, opposite Venus in the 12th. This is slightly better, so eventually a marriage might be more rewarding, if you can skip the romance first!
T