Why did she choose him over me?

ElenaJ said:
Lilith is sexual.
Black moon Lilith is what you should look for.

So, I looked it up and added it into the chart and it's sitting in the 3rd but what's also interesting is that Uranus is sitting there as well. I asked my friend for more details around the sexual nature of their relationship. Apparently, when they broke things off, she wanted to continue sleeping together and he said no.

For some reason, I think she was looking for marriage, but she might have chosen someone to have fun with it more than anything. Is this a right assumption to make?
E 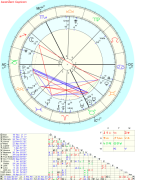 Ok, so it doesn't influence my comments, except that it is in Venus' degree, exactly, so reinforced!
W

ElenaJ said:
Ok, so it doesn't influence my comments, except that it is in Venus' degree, exactly, so reinforced!
Click to expand...

What are your thoughts on uranus sitting there with black moon Lilith. Like I find this interesting.

Also, I wonder if it's because he low-key denied her sex. You know how I love to pin the analysis on real world events lol
Last edited: May 10, 2020
E

Too far from BML to be in aspect.
Uranus isn't very relative to this chart.
What do you see?
W

ElenaJ said:
Too far from BML to be in aspect.
Uranus isn't very relative to this chart.
What do you see?
Click to expand...

Uranus is rebellious so I wondered if this "other" is almost a rebound. Fun, good sex, 5th house isn't that serious either. If we the is 3rd for 7th, even then... not sure, but I find it interesting that it's sitting in the same house. Of all the things to be there.

I think the key insight for me here is that she's tried to move on and it hasn't worked, even though they aren't in contact. and she may or may still be with this new person (i can't figure it out if they've ended things or not) but she's her heart is clearly with someone else, someone she isn't even speaking to.

1. if I was dating someone and they were secretly thinking about someone else, yikes, even though this is life.
2. the power of wanting someone you're not even speaking to. Been there, it's some powerful ****.

did you notice my friend and the moon were also sep from chiron. they were both hurt by the ending of things, or something between them hurt both of them.

The other thing that's interesting to me is sun, her co-sig, is sitting in his 4th house. Or does that not apply here?
Last edited: May 10, 2020
W

Final update: At the time of this, L7 and the new guy actually were no longer together even though we had no idea. L1 and L7 are not together at this time and both are single.

Cosign on her confusion. She's not done yet! Your friend's mind is on money too much for sure.

She likes Mars though (things that are red and Aquarius-related) and at the Mercury degree/27.. she may still be talking to other men online.
W