Where Is My House Key?

I have looked everywhere and can't find my house key. Any ideas? I am represented by Venus. Since Moon is my co-ruler, and it's opposing Venus, does this mean I'm looking in the wrong place (house)? 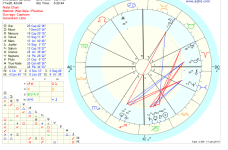 Hi!
I found this link to be helpful for missing items.
http://www.skyscript.co.uk/wit.html

Thank you RisingSag. This is very helpful (and hopeful). I hope the enemy doesn't mean a burglar lol. I'll take a look at the link.
I

I like to go through the steps listed by William Lilly. I have a simplified version of it on my blog - https://ingressus15397045.wordpress.com/2018/08/18/elemental-lilly-finding-lost-things-hydrogen-ink/. The resource Rising Sag gave looks to be very good as well. Might as well combine both.

Pluto is the modern ruler of your 2nd house. I think it is best to follow paths of both traditional and modern rulers to see where they lead.

Pluto is in Capricorn - "If the significator is in earth signs, then the thing is hidden on the ground or earth, under or near some pavement or floor; If you find the thing to be mislaid out of the house in any ground, it notes near a Bridge or Stile where people come into the ground."
"The sign on the cusp of the 4th house and its ruler help to describe the locality of the item and in particular the quality of ground it lies upon."
"Angular houses - the significator for the missing item angular shows that it is near its owner, and suggests a quick recovery. "
"The significator of the property in a moveable sign generally shows that it is not far from its owner."

located in around your or visited primary home our outdoor property near a sewer, toilet, plumbing source - a no man's land' area of home
but where sunlight shows

moon is in outdoor 9th ; and 12th house of lost items is mercury - mercury is located in 4th house - mercury is the key and Saturn is behind it, so you lost it following some difficult task.

maybe mercury will catch the suns cold rays and you will find it in cold area.

as venus is your sig - it looks like prior to losing your key, you were with Jupiter in 3rd house - in neighborhood, around town, at neighbors house - or with a child or some sort of teacher.
W

How kind of you, Inquisag - thank you for this!

Tandy, I only wish that I didn't have to look outside in the cold for this darn key. Thank you for your insight.

I'll be in touch when I find it!

did you go to a family member's house before you lost key - an old person's home?

I have been thinking about this question and the location of where you kept your key is also important. did it slip off a key ring - was it a stand alone key - was it an extra key?

mercury must be on my reading chart right now, lol.
W

Tandy, I had just turned in a car (end of the lease) so I took the car key off the ring and it became a stand alone key. I can't recall if I went to a family member's home although since I turned the car in, I did visit my family in another state for Thanksgiving. Knowing me though, it's in or close to the house.. Glad your mercury is in effect!

If the absence of key is causing financial obligation - look at 2nd house and 8th house. 2nd house would show responsibility for property and 8th house would show what you owe for non responsibility. Mars in 8th! aspects to 11th house moon venus - at an older female friends house or near a 12th house place of hers?
Last edited: Jan 21, 2019
Share:
Facebook Twitter Reddit Pinterest Tumblr WhatsApp Email Share Link
Top