What does he want from me? please help :-/

Me and the guy met each other a year and a half ago.
The initial eye encounter was completely coincidental in a public place, but at the time of the void moon.
Then we set a proper first date n-o-t on a void moon..

It was a kind of strange connection and no definition .... which lasted a short time intermittently.

Anyway, since then, it was a complete break.
Everyone of us continued with his life.

Suddenly, he renewed contact and want to meet with me more few days...

I've attached a horary chart of the question:
What does he want from me?
What is his intention?

I do not know if to meet with him or not ??
because I dont want to get hurt again. 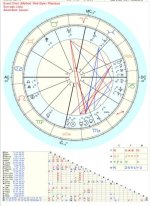 You as moon are closing in on a conjunction with Venus (love) squaring mars (sex, on the 8th cusp). He is separating from mercury, as is his co-ruler Uranus, indicating he just broke up with someone. However, there is no movement between the two of you. It would seem he is just thinking about filling in the rebound gap with you, but will move on.

the moon is in scorpio

if he is serious

thank you dear for your help and support.

yes. you right. I was negative with this idea. because I dont want to get hurt again.


1.
If the first randomaly meeting was in a void moon time....
but we meet again after one and half years n-o-t in a void moon...
there is effect to the first void time? or it's a new meeting event chart?

so the interpretation for the scorpio in the horary chart it's different?

Nof said:
thank you dear for your help and support.

yes. you right. I was negative with this idea. because I dont want to get hurt again.


1.
If the first randomaly meeting was in a void moon time....
but we meet again after one and half years n-o-t in a void moon...
there is effect to the first void time? or it's a new meeting event chart?

so the interpretation for the scorpio in the horary chart it's different?


From 15 degrees Libra to 15 degrees Scorpio is an area of the zodiac which is via combusta. When the Moon is via combusta the horary chart either can't be interpreted or nothing can be done about the problem or situation related to the question.


some more comments on the moon in scorpio from another site:

The Via Combusta Moon is "unpredictable"; Lilly says "not safe to judge". That says it all! The future action the chart predicts is not stable or, in a sense, "legible" in the chart. The querent may be somewhat obsessive about the matter in question. The chart may otherwise be very descriptive, however, and that will give you practice reading a chart.


either way- your emotional state is not letting you see clearly

i always live by the following:


if i just for one moment feel doubt, a negative feeling or something just being not right in my gut- about any subject matter- i dont do it. its really simple and it has never failed me. if its not hell yes- then its a no for me. usually not doing that particular thing results in me finding out, later, some facts that confirm that my feeling on that issue was right. if you have a bad feeling about something- do not ignore that. trust YOURSELF. if your own emotions are telling you- this doesnt feel good- then why would you not listen to that? no one on earth can give you better advice- believe me.

so if you are sooooo torn inside of what to do

just go on the date- if it doesnt work out- well youve done that before, with the same guy- did you survive? sure! even if he breaks your heart- you will survive for sure and you will at least know that you tried instead of always wondering- but what if i did go? would everything have been different? either way- if you dont make a decision- or you do make a decision- if you are meant to be either way, you will be together. and if you are not meant to be together- you wont. doesnt matter what YOU do- go or not go, if it is truly yours- you cannot escape it. if it truly isnt yours- nothing you do will make it stay.

just say to yourself- before you go on that date. if it doesnt work out- at least i know i tried. if he breaks my heart- i knew that could be an option. i now at least know for sure that this is NOT what i want and ill survive just like i did last time- its a breakup, not the end of the universe. im just going to see what happens. have fun with it- dont make such a drama out of it. BUT if you go in worrying and being afraid of a potential critical situation already being half depressed just at the mere thought of it- then i think you should stay home, maybe meditate a bit, read some books, watch something on youtube to calm yourself- and move on with your life because nothing is worth worrying about and certainly no boys thats for sure
Last edited: Oct 11, 2018
Share:
Facebook Twitter Reddit Pinterest Tumblr WhatsApp Email Share Link
Top