What do T-Squares do exactly?

What do t-squares do? And how does it affect the planets that are involved in it?

T squares generally give the impression that the planets involved are somehow incompatible with one another, but they are bound to one another and so obstruct one another which causes tension. The challenge is to make adjustments to the way each planet operates so that they can work together and put the tension to good use.

The greatest benefit is the flowering of consciousness which is required for the adjustments to occur. Some people achieve much using the tension of the t square without making this shift, but they tend to be less fulfilled deep down and less easy to be around.
Last edited: Oct 2, 2014

Zarathu said:
T-Squares, in my opinion, are an essential part of determining cognitive thinking patterns in astrology.

They are also determined by the strength and friction of the combined opposition and two squares.

I think I have one, if I remember correctly. It goes something like this: Mercury(in Scorpio) square Uranus(in Aquarius)
Mercury opposition Saturn(Taurus)
Uranus square Saturn

Zarathu said:
I'd need to see the chart. PM me the data unless you are under the age of 18.
Click to expand... 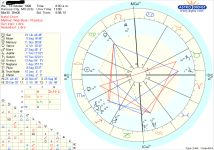 Does an out of sign t square havei less tension?

Hi Stranger. When looking at a t square with one personal planet involved, its often a good idea to look at the configuration through the 'eyes' of that planet first. So in this case, having reflected on the meaning of Mercury in Scorpio in the first house, you can consider how Saturn in Taurus in the 7th could make it difficult for this Mercury to fulfil its needs. So perhaps intense and insightful analysis features significantly in your natural way of being in the world, but you sometimes experience others as disapproving of this and expecting you to be more boundaries and pragmatic. In order to get the best of this aspect, you may need - gradually over time - to become less bothered about what others think. Saturn in Taurus in the 7th will always give you a keen sense of how to build solid relationships with others based on a pragmatic understanding of the dynamic, but won't restrict you unnecessarily.

Mercury square Uranus suggests a strong need to use your mind in a progressive way, truth- seeking way. This can be unsettling for Mercury in Scorpio, especially in as much as it is influenced by Saturn. Similarly, Mercury's rejection of Saturnian authority will be enhanced by the influence of Uranus on Mercury.

So in one sense, this Mercury is pulled between preserving a sense of security in relationships, and breaking down barriers in search of truth (this ambivalence is also inherent in the sign Scorpio, as well as in the tension between Saturn and Scorpio.)

A sign that attention needs to paid to how the t square is expressing, is a tendency to stubbornness in the way you think and communicate, and also looking down on the thoughts of others. Mars and Moon are in Sagittarius, with Jupiter in Taurus, which suggests that when you feel insecure you may cling to a particular way of understanding.

Remember that all three planets are going to be expressing all the time, especially when you are anslysing, interpreting, problem-solving, learning, communicating, etc. You may sometimes feel as though you are rebelling against authority, and then realise that you are communicating in a slightly authoritarian manner. Or you may try to uphold a notion of what kind of thinking will help to maintain a communal dynamic, and then realise that this is disrupting the stability of the dynamic.

Hi. I think this is a tricky question. Would Venus in Cancer be happier with Jupiter in Capricorn (which shares its need to maintain that which brings a sense of security, but which may inhibit the flow of feeling) or in Sagittarius (which can be insensitive to Cancerian needs in a different way).

ANotSoMysteriousStranger said:
What do t-squares do?
And how does it affect the planets that are involved in it?
Click to expand...

AN INTRODUCTION TO ASPECTS AND CHART SHAPING IN ASTROLOGY http://www.skyscript.co.uk/aspects2.html

'....An aspect is the precise distance between any two points in a horoscope.
Usually aspects are formed between two planets,
although aspects between any one planet and the angles (Ascendant, Descendant, MC and IC)
are also considered.

The aspects are used to establish how the planets combine to stimulate and moderate each other's influence.

Aspects are divided into categories, major or minor

'.....The tense aspects cause friction between the planets involved.
This friction brings difficulties and problems,
which may be psychological, environmental or a combination of the two.
In coping with these problems many people experience failure,
but some will be driven to overcome their difficulties
and in the process develop their astrological potential....'

There are nine aspects in common use: the five major aspects: conjunction, opposition, trine, square and sextile

four minor aspects: the semi-sextile, semi-square, sesquiquadrate and quincunx.
Quincunx is also known as the Inconjunct.....'

When three or more planets are connected to each other by aspect,
they form a pattern with a meaning of its own.

'....Two planets in opposition are both in square to a third planet.
This brings tension and sharp, pressing problems,
the result of which may be great energy
and consequently a better than average chance of success throughout life....'


'....When interpreting a T' Square all the factors involved - planets, signs and houses
- must be taken separately
and then built up into a picture of the choices, difficulties and solutions which each planet suggests. ...'

Cardinal Signs, there is exceptional dynamism and energy;

Mutable Signs, they may try to solve,
or even avoid, the problems associated with the 'T' Square
by being flexible and adaptable. ....'
W

miquar, you always have some of the best responses to questions on this forum. Kudos to you!

Regarding t-squares: do t-squares involving the ASC or MC count? I've read opinions from both sides of the fence.

WeCareALot said:
Regarding t-squares: do t-squares involving the ASC or MC count? I've read opinions from both sides of the fence.
Click to expand...

A planet in 1st house opposing another planet in 7th house both squaring MC does not help MC. Usually, on the contrary, they bring setbacks in professional life. But if there is any planet with MC in the formation of apex of T-Square, usually that brings successes.

There are several bodies in sky, not used in chart, but they have astrological significance. For example, Asteroids, trans-Neptune planetoids, etc. some time may be in conjunction to ASC or MC, thereby it may appear that ASC or MC, is acting like apex of T-Square.

Hi WeCareALot. Thanks for your kind words of encouragement.

I think that when looking at the different points of the chart which make aspects we should be aware that they fall into different categories. The angles are nodes (points where a line meets the celestial sphere, this line being formed by the intersection of two planes). A planet is an actual body of mass.

How we define the term 't-square' isn't all that important. What is important is that we realise that a celestial body represents a function or drive operating within, and on behalf of, the organism as a whole - for the purposes of the psychological astrologer, the human psyche. The angles represent critical points in the diurnal cycle, which is a cycle of consciousness because we alternate between consciousness and unconsciousness during the diurnal cycle of the all-important life-giving Sun (Rudhyar).

Different parts of the diurnal cycle represent different viewpoints from which to become conscious of who one is. The cycle as a whole represents the potential for full consciousness of who one is. Each angle represents a very significant point in the cycle, but they are paired by axis and in fact when a celestial body aspects one end of the axis, it also aspects the other. So to understand the role of the angles in aspect configurations, we need to define what the horizon axis signifies and what the meridian axis signifies.
L

I finally got my astro software reinstalled after years of collecting dust (and I did get it updated to the latest version) as I re-emerge into studying my chart. It's like starting over, but things are falling into place quickly.

Speaking of T-Square...I have one, with an Moon and Nepture facing off in the 5th - 11th houses, getting broadsided by a Mars/Jupiter conjunction in the 2nd house. These are all Cardinal.

I'm not asking for help in interpreting it, but I am interested in learning what impact the lunar eclipse had on it as it was within a few degrees of the opposition.

Hi. I like your use of the words 'facing off' and 'broadsided'

I think that a few degrees is a very wide orb for an aspect from a transiting new or full moon.

miquar said:
I think that a few degrees is a very wide orb for an aspect from a transiting new or full moon.

That's one way of looking at it. Just considering the planetary energies, I think of Neptune and Moon as very ephemeral, elusive energies whereas Mars is so action oriented. The opposition causes undefined lines, confusion, but also revelations. Mars is constantly pounding against these opposing but blending energies and for me, it creates a circular circuit, the frog in the blender type mix. It has been VERY challenging but I have become quite fond of it.

The eclipse landed within 1 degree of the opposition.

I have been meaning to do some research on that open space opposing the square, creating a grand cross, to see if that point has been a major factor in my life's unfolding.