The video is a light expression of Toro

By house it shows where mistreatment occurs.

Whether you are the abused or the abuser, Toro shows by natal placement and by transit.

j/k Ironically, my husband's Toro is in his 11th in between his Sun & Venus. He is very slow to anger, almost never since he grew up, from the early days,


I haven't a clue what this might suggest, but considering we are all one portion of something so much larger, I suppose, Toro would represent something within us, even if it doesn't come out much or at all.

Since my natal Toro was direct, as was Ralph's Toro, but mine was in Aquarius, and his 9 months later when born, was already in Libra, I figured, this is VERY fast moving. trump's is Rx (needs to repeat the lesson which accompanies or is assigned to rx planets) is what I read - and see the retrogrades...

Toro is an Apollo asteroid, a subgroup of near-Earth asteroids that cross the orbit of Earth. It orbits the Sun at a distance of 0.8–2.0 AU once every 584 days. Its orbit has an eccentricity of 0.44 and an inclination of 9° with respect to the ecliptic

Did TORO strike a human??

Meaning, did a piece of it strike someone?

The grapefruit-sized fragment crashed through the roof of a farm house, bounced off a large wooden console radio, and hit Hodges while she napped on a couch.[3] The 34-year-old woman was badly bruised on one side of her body, but was able to walk. The event received worldwide publicity.

The meteorite was confiscated by the Sylacauga police chief, who then turned it over to the United States Air Force.[8] Both the Hodgeses and their landlord, Bertie Guy, claimed ownership of the rock, Guy's claim being that it had fallen on her property.[8] There were offers of up to $5,000 for the meteorite. The Hodgeses and Guy settled, with the Hodgeses paying $500 for the rock. However, by the time it was returned to the Hodgeses, over a year later, public attention had diminished, and they were unable to then find a buyer.

Ann Hodges was uncomfortable with the public attention and the stress of the dispute over ownership of the meteorite.[9] The Hodgeses donated it to the Alabama Museum of Natural History in 1956.[8]
The day after the fall, local farmer Julius McKinney came upon the second-largest fragment from the same meteorite.[10] An Indianapolis-based lawyer purchased it for the Smithsonian Institution.
The McKinney family was able to use the money to purchase a car and a house


Based on orbital paths, Toro is the best candidate for the source of the Sylacauga meteorite, the first meteorite authenticated to have struck a human, Mrs. Ann Hodges of Sylacauga, Alabama on 30 November 1954.
Last edited: Jan 18, 2022

Lady believed to have been struck by a "piece" of the asteroid, TORO #1685:


Would be interested is finding the transit when she was "hit" by a piece of it.


Ann Elizabeth Fowler Hodges (also known as Mrs. Hodges, Mrs. Hewlett Hodges, and Mrs. Huelitt Hodges;[3] 1920–1972) is the first, documented individual to not only be struck by a meteorite but also live through the encounter.


Her Photo shows the huge bruise she sustained - and perhaps other injuries? You would think that Lois Rodden would have done her chart for us way back then?? But I cannot find it.

Her natal chart tells the tale even without the tob known. With a "Mystic Rectangle" which included Venus as well as Pluto - she was SAVED that day, when a piece of Asteroid Toro, (conjuncts her Venus and tr NN) (fate) triggering
the Mystic Rectangle, and she was very lucky indeed. How lucky? (see photo on link I posted above) 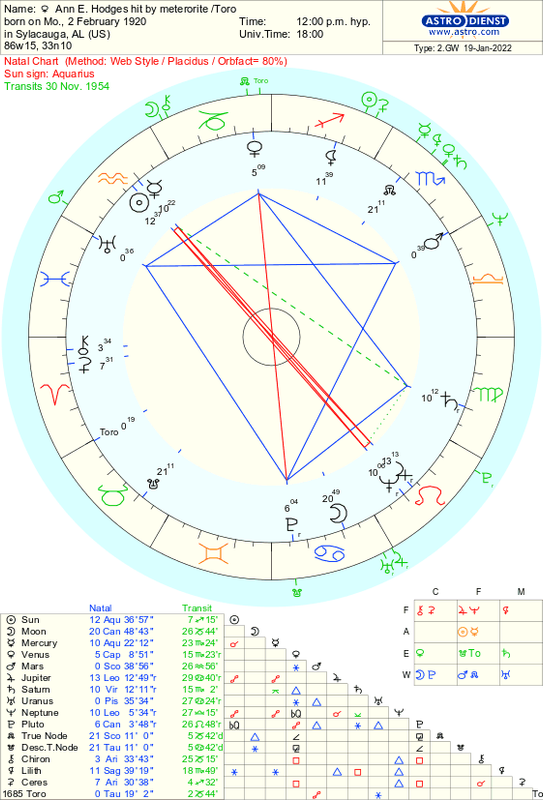 Wow, cool! I will be back! Thank you!

Natal Toro is in exact opposition to Mars

Transit Toro is trine her Natal Toro and Square her Chiron.

Hahaha! Don’t you love this sheet!

You know, you can’t make this sheet up!

And IC is conjunct Pluto!

Opal said:
And IC is conjunct Pluto!
Click to expand...

We don't know the angles, the time of birth


However, as the old TV Host Joe Pyne once said, "I've never been to the Sun, but I know it's hot"

I do think her Mystic Rectangle saved her life.

I would tend to agree, the mystic triangle was her lucky stars!

I wonder if Toro would have consistency with mass killings. Or mass crashes. I will check later, not here for long tonight.