This is too much, can you please help?

I met this guy while working (only a few weeks) at the same place with him. He approached me first, just in a very casual way to say hi. He seemed to be very easy going guy, likely having lots of female friends (or "friends"). There's something "creepy" and magnetic too in a way how I feel about him.

Anyway, we only chatted like 2-3 times, talking about some pretty superficial things. At times, the conversation slipped to very personal and serious issues. I suddenly realized I opened up things I haven't even told my friends over 10 years. I felt like he put a spell on me, I'm usually very private and shy person. We didn't even know each other at all, and it still happened. Now I just can't get of him my mind, never ever had felt just a strong pull and sexual attraction towards anyone. And at the same time, I felt so at home while we worked in the same room. It was like warm air surrounding us with silent fireworks while we locked our eyes. But I haven't heard from him outside of work, so I guess he is not into me at all.

I wonder if you could explain what is going on here, why I can't get out of my mind, and why it seems it's only me who has these feelings

Here's our composite and synastry (me red, I don't know his exact time of birth so the houses aren't correct for him and in composite).

I have to caution, though, that two people can get along really well, but that doesn't mean one or both are relationship material. We can say more about people's capacity for commitment by looking at the two individual birth charts. They're a bit hard to read off the biwheel.
D

in composite Venus is cazimi-in the heart of the sun; while fortunate, this can mean a too intense venus quality, which could be problematical in the relationship; then there is the fall of cazimi Venus in Virgo, plus the question posed by Pluto in Scorpio-seems to me there is both intensity & conflicting factors shown in this composite. The key factors are those of Venus & Pluto.
I

waybread said:
I can't analyze your synastry bi-wheel without seeing the planets' degrees. Can you add the aspectarian (chart of planets' degrees) that came with your second chart?

I have to caution, though, that two people can get along really well, but that doesn't mean one or both are relationship material. We can say more about people's capacity for commitment by looking at the two individual birth charts. They're a bit hard to read off the biwheel.
Click to expand...

I guess you meant the degrees shown here? Sorry I'm new to astrology 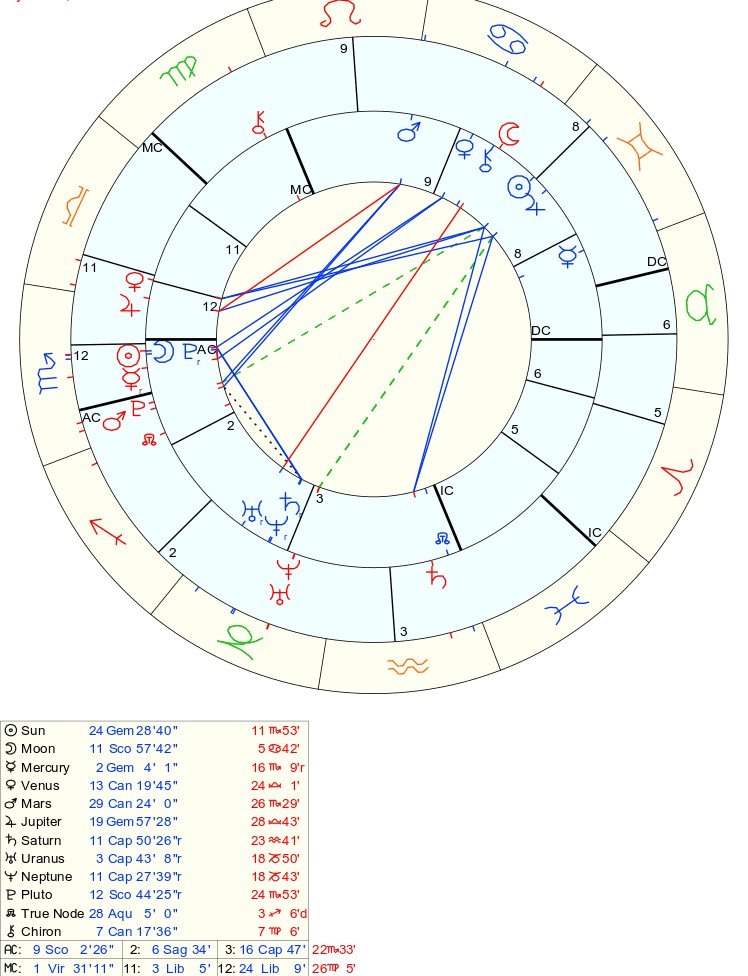 This is his natal chart 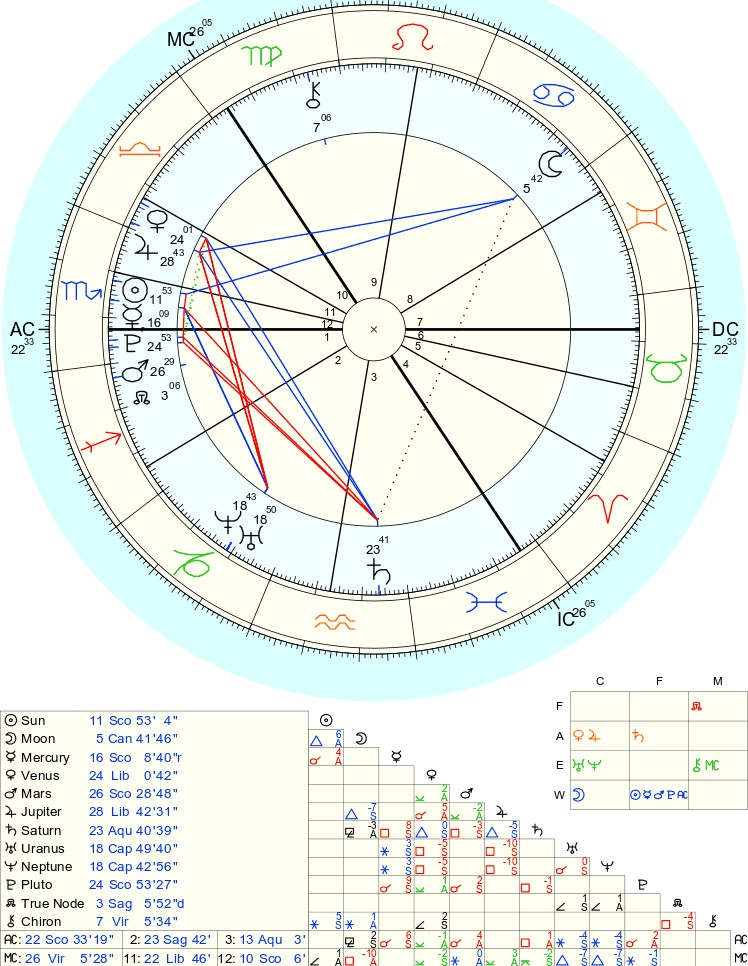 I think he is generally much more outgoing and very charming compared to me, but then I sensed something deeper under that surface...

Acknowledging that you don't have a correct birth for this man, I will leave out that intriguing-looking moon-Pluto in Scorpio in the first house, because it might be anywhere in the chart. However, feeling things very deeply and intensely would be part of his emotional make-up. It also might make him a bit controlling (Pluto) or secretive (Scorpio.)

I think he has very complicated relationships with women, with Saturn, Uranus, and Neptune opposite Venus. Venus says something about his ideal woman; and with Venus conjunct Chiron, he's probably had a few heartbreaks. (Not that he would admit to them.)

The question is how emotionally mature he is. If he's worked through his Venus problems, that's great. If he's trapped in them, he might be difficult to get along with.