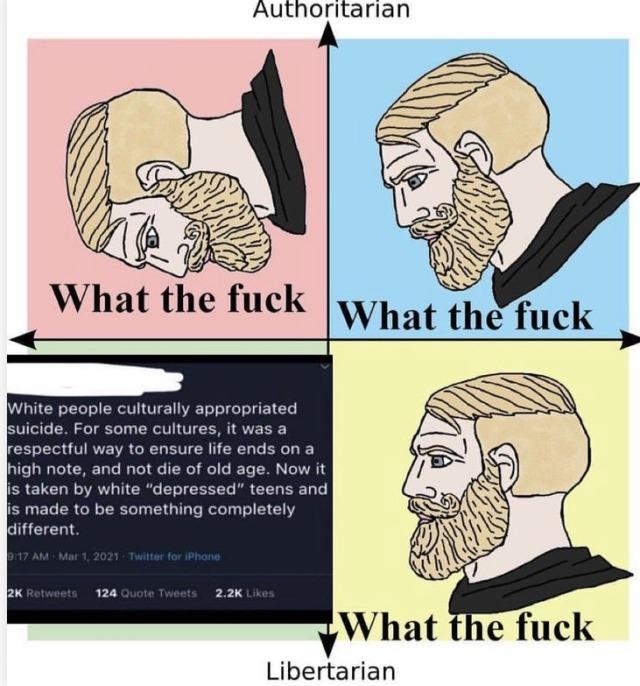 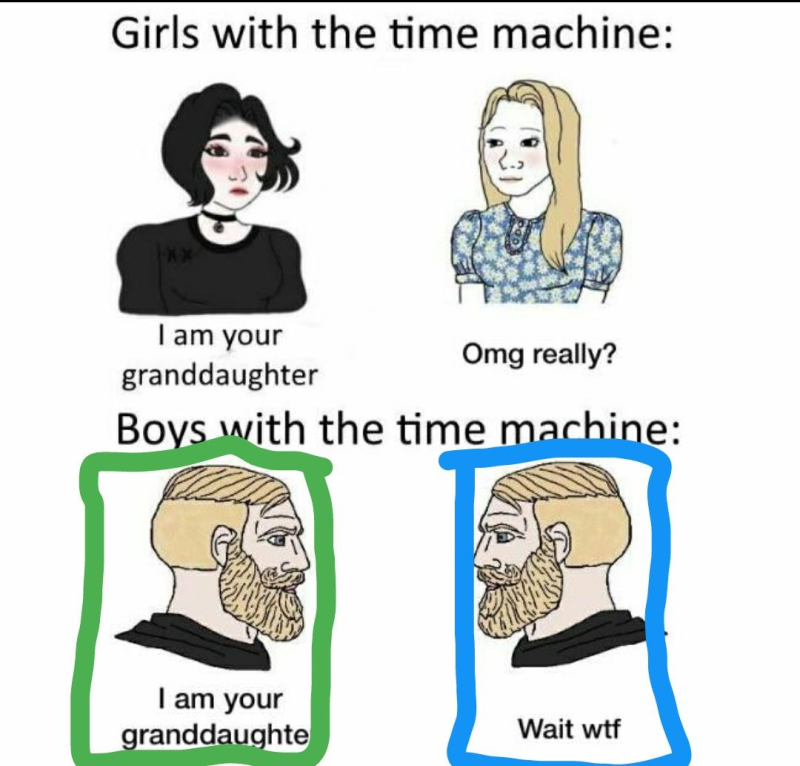 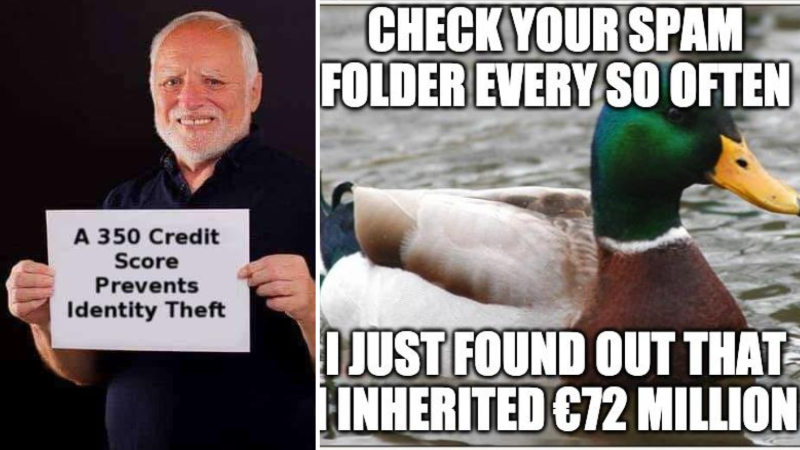 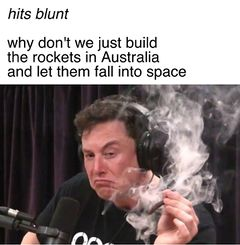 Remember the days when crazies would stand on milkcrates and shout at crowds of people?

"THESE ARE THE END TIMESSSSS! REPENT!!!!!"
"LIZARDS TOOK MY BABY! THE ALIENS ARE THE OLD GODS! THEY'RE COMING FOR US ALL!!!"

Blaze said:
Remember the days when crazies would stand on milkcrates and shout at crowds of people?

"THESE ARE THE END TIMESSSSS! REPENT!!!!!"
"LIZARDS TOOK MY BABY! THE ALIENS ARE THE OLD GODS! THEY'RE COMING FOR US ALL!!!" .
To the majority who are leaving
remember that your decisions made the state that way.
Respect and do not bring such decisions to the state you are going to.
You brought it on yourself in the first place voting for such people


.To all Californians: stay where you are and FIX the MESS you created.
Don't leave and go to another state that you're going to go to
and vote the same policies that got you into the mess you're in

‘...British Ministry of Pretense...’
Chernobyl is in Ukraine


Imagine the rejoicing of the Davos crowd
if the grain producing areas of Ukraine and Russia were offline
as a result of a radiation disaster, famine, starvation and population reduction.
Doesn't get any better than that

It’s not about Trump guys.
Under this kind of government no one is safe
Think about they will hire 80 thousands IRS agent to audit people.
Not audit politicians audit you. Sanctions on Russia
were supposed to cripple the Russian economy
and force Vladimir Putin to the negotiating table
and then out of Ukraine.

Unfortunately, the reality has proven quite different

as Russia has responded by restricting distribution of the nation’s natural gas supplies to Europe
leading to shortages and rationing in countries like Germany
that are heavily dependent on Russian energy.

.
a "...source..." has stated that they didn't find what they were looking for
so it remains to be seen , if they will now manufacture it
This was not a legal search. It was a break and enter.
No search warrant was given to the occupants of the premises. Enough said


A Federal pantie raid?
Something for the big guy to sniff

In Article 111 of the Crimean Constitution of 1992, it was clearly stipulated
that the exclusive competence of the Supreme Council included the adoption of the Constitution
the constitutional and other laws of the Republic, and the amendments and additions to them.

Hence, the Crimean Constitution of 1992 could be repealed only by a separate law of the republican parliament.

However, on 17 March 1995 the President of Ukraine Leonid Kuchma
unilaterally abolished the 1992 Constitution of the Crimea
and removed the President-elect Y. Meshkov from his office.
In other words CRIMEA WAS OCCUPIED BY UKRAINE since 1992

There is nothing which I dread so much as a division of the republic into two great parties
each arranged under its leader
and concerting measures in opposition to each other.
This, in my humble apprehension, is to be dreaded
as the greatest political evil under our Constitution. •John Adams

david starling said:
If someone had gone to school with Jesus, what's the worst thing Jesus could have written in his yearbook?

takes a licking and keeps on ticking

1867: the U.S. becomes the first country to attack China with a warship
. 1874: during the Mudan incident, the U.S. supports Japan in its invasion of China.
1885: Qing Dynasty declares Taiwan a Chinese Province.
1894-1895: during the First Sino-Japanese War, the U.S. sells weapons to Japan
aiding in the defeat of China, and the ceding of Taiwan to Japan via the lopsided Treaty of Shimonoseki.

1943: The joint U.S.-British Cairo Declaration calls for all Chinese territory occupied by Japan
to be returned to China upon Japan’s defeat; the Declaration explicitly mentions Taiwan.

1945: China announces the reunification of Taiwan and other territories to the mainland.

1947: An anti-government uprising in Taiwan prompts the 228 Incident, in which
around 20,000 civilians were killed
as it was violently suppressed by the U.S.-preferred leader Chiang Kai-shek.

1947-1990s: The White Terror repression of Taiwanese civilians by the KMT
under the direct orders of Chiang Kai-shek; more than 3,000 Taiwanese were executed.

1949: the PRC is established; the Nationalists flee to Taiwan
amid U.S. military intervention to stop reunification.
The intervention ended up actually doing Mao a favor, as he was then able to focus
on rebuilding the motherland after years of war and colonialization by other nations, including the U.S.

1978: UN Resolution 2758 gives full recognition to the PRC
as the legitimate government of China, including Taiwan; the U.S. did not sign this Resolution.

2016 to today: A powerful U.S. puppet, Taiwan’s Democratic Progressive Party
has been disrupting reunification efforts by a supposed “...independence...” movement.

2022: Nancy Pelosi makes an official State visit to Taiwan.
Pelosi’s visit angered the Chinese people and many peoples worldwide.
Her action is recognized for what it really is:
a political ploy to continue support for U.S. hegemony

During the formative years of the PRC, many believed like most “...good Americans...”
that China was a rogue nation, out to capture the world and impose its communist values globally.
Not once did it occur to any to question the U.S. representations as bogus

here was a nation that had just recovered from WWII, a Japanese invasion, colonializatio
and a protracted civil war that lasted from 1927 to 1949
- this was a nation that wanted to take over the world?
Many have since discovered the truths; PELOSI has not.

Today’s U.S. government aka the “...Military-Industrial Complex...”
continues its anti-Chinese provocations, in spite of the fact that
modern China is completely different from the early China.
It is more out of habit than awareness of reality
that drives Pelosi’s and many U.S citizen’s current views about China.
Most “...aware...” people saw her recent visit as a setback
against a timely reconciliation of Taiwan and Beijing.

Additional news is, many globally were angered by her visit.
Taiwanese public was also angry at her.
There were demonstrations against her visit throughout Taiwan.
What her visit has done is
it has awakened the Taiwanese people’s awareness
of how their province has been a pawn of U.S. hegemony
and they are now taking a second look at the virtues of reunification.
Thanks to Pelosi’s otherwise ill-intentioned visit
the ongoing reunification dialogue progress between Taipei and Beijing
is now likely to be accelerated rather than having a delayed resolution

.
Perfect! FBI is helping Trump get re-elected in 2024! Thanks FBI, you rock! 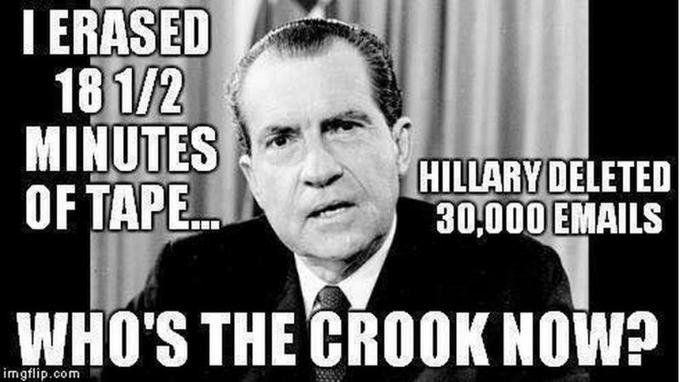