Since the site - "My Life"is seldom wrong as they base their info on credit records, court records, etc. I'd think that Smiley has a good chance IF she was born in 1981 Yet it appears to me that Tr Jupiter (for Sen. Murphy) cj. her Node will win out over her?
Background of Patty Murphy: CapAquaPis said:
Jupiter is in opposition tonight: the closest to Earth in 59 years (1963 in Pisces, its traditional or co-ruler sign until April it went into Aries) and is in 3' Aries while the sun is in Libra (MC opposite IC on my natal chart). It's the brightest thing you see in tonight's sky rising on the eastern horizon after sundown, except for the waxing crescent moon. So...what will come off of this "lucky" object by the name Jupiter or Zeus: the God of Gods? And on (St.) Michaelmas Day on Thu. Sep 29th? Jupiter is currently in retrograde and with current events not in our favor, this is too close to dis-comfort. 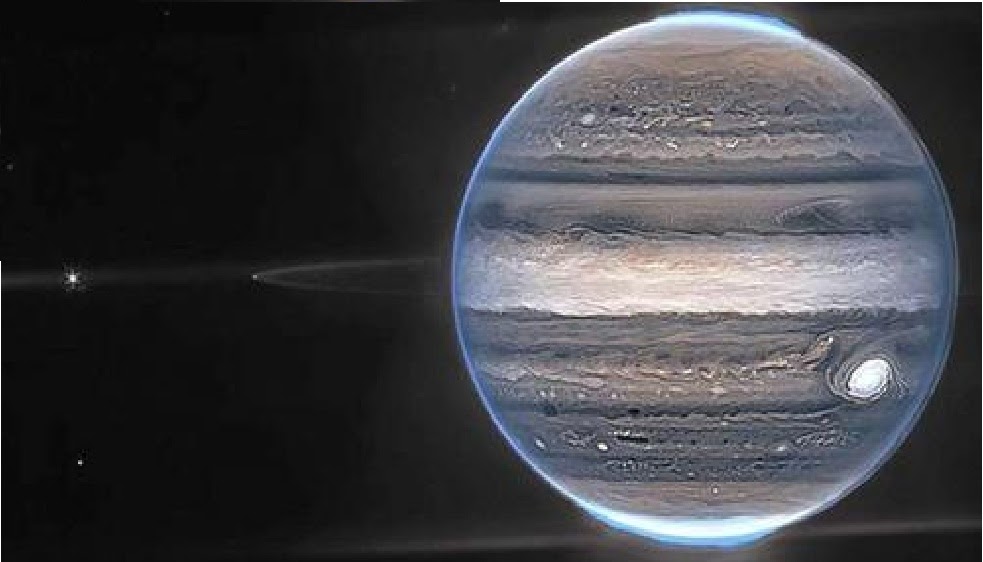 Look Up! Jupiter Will Come The Closest to Earth in 59 Years Tonight

There's a once-in-a-lifetime encounter happening right now for everyone who is captivated by things in the sky – and you won't want to miss it. It's n

And to add more to the post, Jupiter was in 17' Pisces retrograde (like this year's) opposite the sun in 17' Virgo on Sep 11? 1963, the Sirius new year, when the brightest magnitude star Sirius is conjunct the sun during sunrise on that day...and the full Moon is in 17' Virgo conjunct Jupiter on Sep 18th-a week later. Tonight, the Sun/Jupiter opposition involves the first quarter Moon in Capricorn or Aquarius...and a week later (Oct 8-10th), the full Moon conjunct Jupiter in Aries.

CapAquaPis said:
And Ward Churchill kept saying how much Native American he is having different blood quantum results, and the United Keetoowah Band revoked his honorary citizenship he exaggerated to the media that it's a real one. Again, he gave away his lies to the world, plus he still refuse to give up his "American Indian" identity stating many in the early 1800s refused to register to the US government in fear of removal, internment and murder, but in reality, they along with royalty, the rich, Mormons, German and Russian Jews, and Black Americans and South Africans, are highly documented groups of people in world history to enforce national racist policies, or the first three, for extensive genealogy.
Click to expand...

6 months later, I came upon a post on Ward Churchill back when we were fresh in the War on Terror in 2006:

Mercury Retrograde, The Democratic Party & The Astrological Left: How Intellectual Dishonesty Is Killing Astrology 1:34 AM 3/14/06 Tue Since Mercury, the planet of rational thinking, communication, logic & reason, is retrograding in the sky - and in its worst Sign, Pisces - I thought it...
www.astrologyweekly.com

*Recently, out in Colorado - the same State that is home to one Ward Churchill, the professor who said that what happened to the over 3000 killed in the World Trade Center on Sep 11 was justified because the majority of them were "little Eichmanns" - a taped recording of a high school geogrpahy teacher came to light. Very interestingly, this teacher wasn't teaching the kiddies where Iraq was on the map - he was spending tax payer dollars and wasting the students' time, "educating" them on why Bush is so bad, etc. Strangely enough, after a brief suspension, this teacher was reinstated(!); it is still not known, whether he was ever censured or rebuked, for doing what any academic could clearly see was an egregious and blatant error.*

He was later terminated from his college professor position for his inflammatory, insensitive statements, as well a history of lying, fabricating and plagiarizing his writing material, and falsifying his Native American (Cherokee/Creek-Muskogee) ancestry, the first "pretendian" among a few dozen to be reported in the press in the 2000s to become more commonly reported in both the US and Canada in the 2020s today. Ward Churchill was also critical of the state of Israel claiming this was about colonialism of the third world and the colonization of Palestine displacing its historic ethnic Arab and mostly Muslim inhabitants (there are Christians and non-Arab communities there as well), but had an antisemitic bent similar to Neo-Nazis, KKK and Alt-Right, he is of the radical Left with sympathies to Soviet communism and anti-US/Americanism claiming that's just criticism of American foreign policy. To pretend to be from a marginalized social minority group to experienced colonialism and racism, however, Ward Churchill went after the Cherokee Nation and federally recognized Native American tribes for their policies of blood quantum, residency and lineal descent because they are sovereign nations who decide the right of tribal nation citizenship, recognition of descendants who can prove documented ancestry, and they're more based on familial kinship, community and (home)land connections, and cultural involvement to determine identity than "race", "blood" and "genes" like scientific but questionable DNA tests, as the Cherokee Nation in Oklahoma understood the issues of qualifications for tribal enrollment gatekeeps non-enrolled descendants of previous 19th century rolls (only by ancestors on the 1907 Dawes Rolls to determine a person's birthright of citizenship), but Churchill's harsh acts of protest against these policies are unusual and suspicious. One can say he was a RL troll, getting American Indians fooled in his university, US Army service and American Indian Movement on his side by fraudulent "racial" origins he used to Jew-bait and inflame Islamism.

The cross over America from 2017-24: 2 total solar eclipses and it's hex, jinx, curse...ways to describe where America was and is still gonna be BAD.

Republican Strategist, says Trump seems to be deranged - (see clip from State of the Union)

'Unhinged, deranged' Trump 'may be a danger' to himself and others: GOP strategist

During an appearance on CNN's "State of the Union," Republican Party campaign consultant Scott Lennings launched a brutal attack on Donald Trump over his threatening social media post that claimed Senate Minority Leader Mitch McConnell (R-KY) has, as Trump put it, a "DEATH WISH."Trump's...

In the post, Trump wrote, "Is McConnell approving all of these Trillions of Dollars worth of Democrat sponsored Bills, without even the slightest bit of negotiation, because he hates Donald J. Trump, and he knows I am strongly opposed to them, or is he doing it because he believes in the Fake and Highly Destructive Green New Deal, and is willing to take the Country down with him? In any event, either reason is unacceptable. He has a DEATH WISH. Must immediately seek help and advise (sic) from his China loving wife, Coco Chow!

then added, "He’s not even trying to hide the racism at this point. Just despicable."
Last edited: Oct 2, 2022 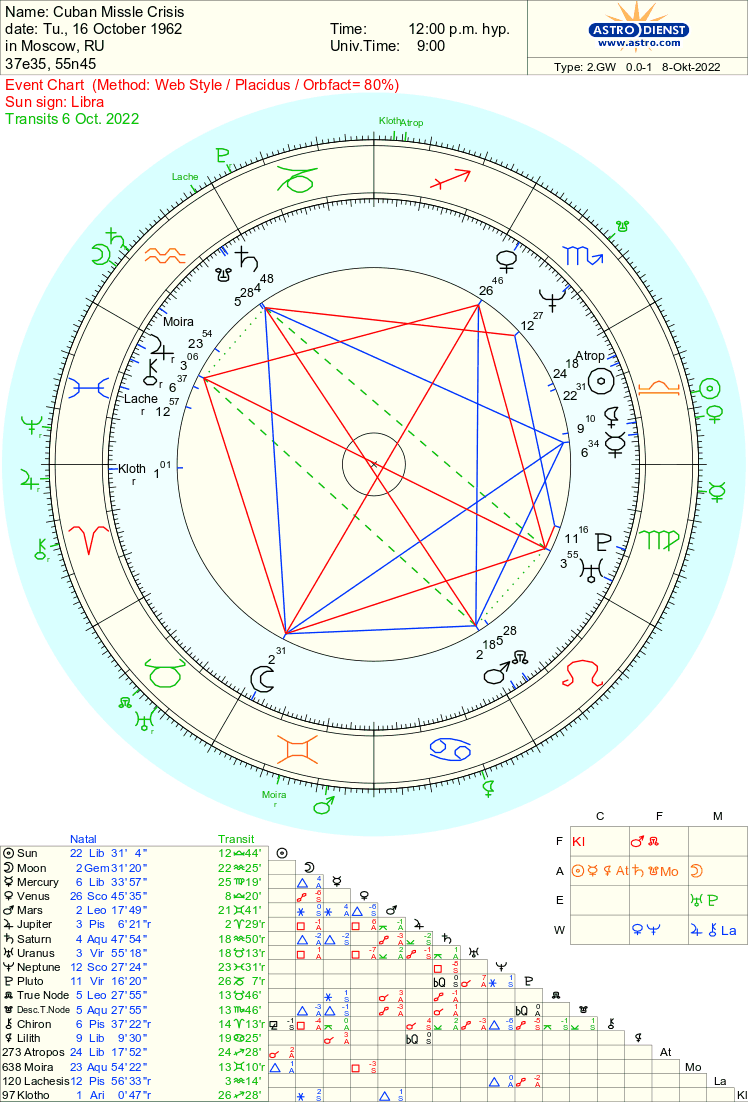 I recall being 15 yrs old and my mother calling me into the living room and T.V. to see the Crisis building up in D.C. with Russia.
It bored me, as my friends were waiting!

Teacher still missing - (amnesia?)
Michelle Reynolds was born on December 27, 1973, in Natchitoches, Louisiana. In 1999, Reynolds moved to Orange, Texas, for a teaching job and met her future husband, Michael Reynolds 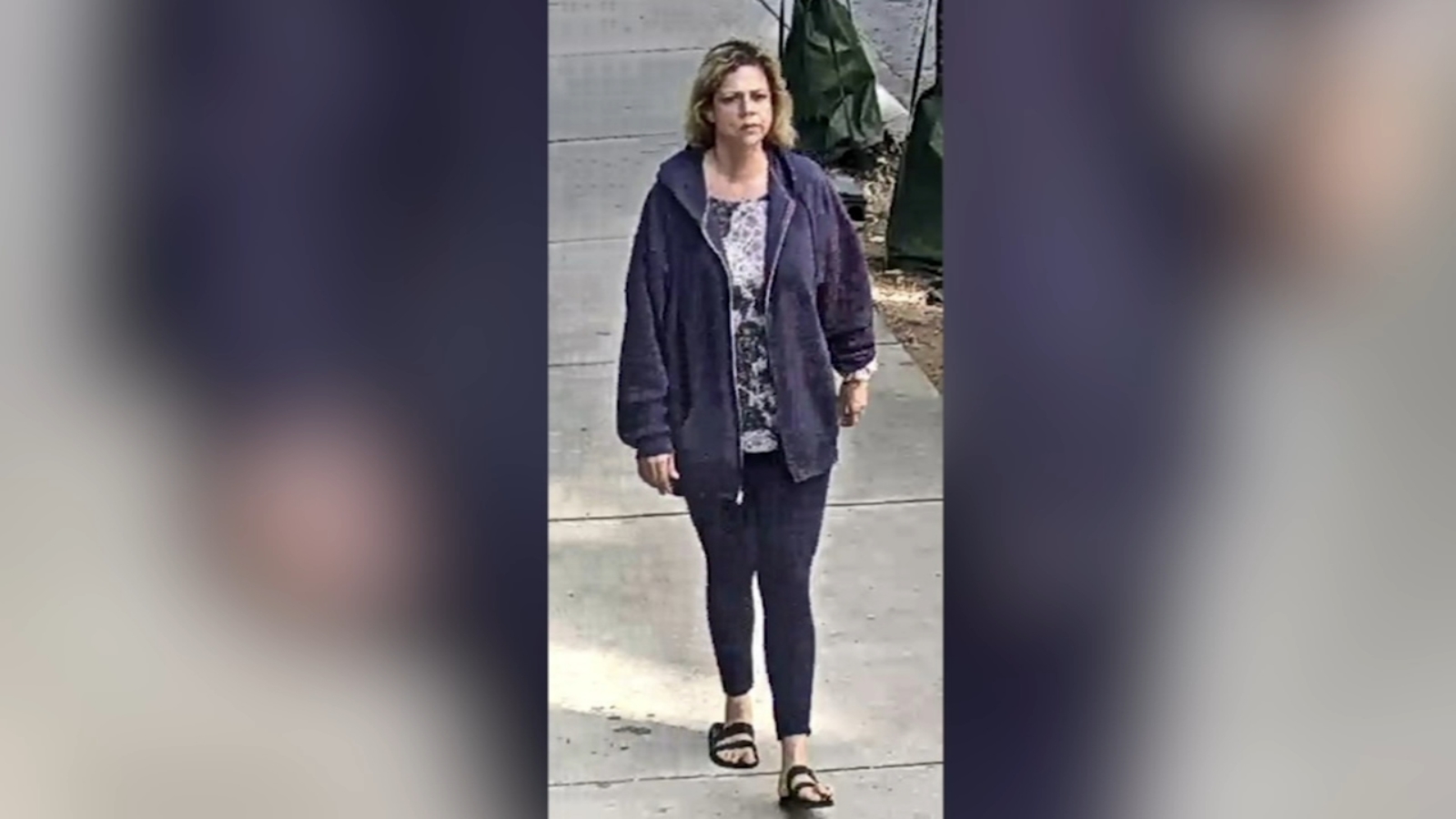 A new photo released by Texas EquuSearch shows Michelle Reynolds walking along Constance Street in New Orleans on Sept. 23 in the same clothes she was last seen wearing.

Tr Pluto squares her Uranus and Mars: /We pray for her safe recovery - 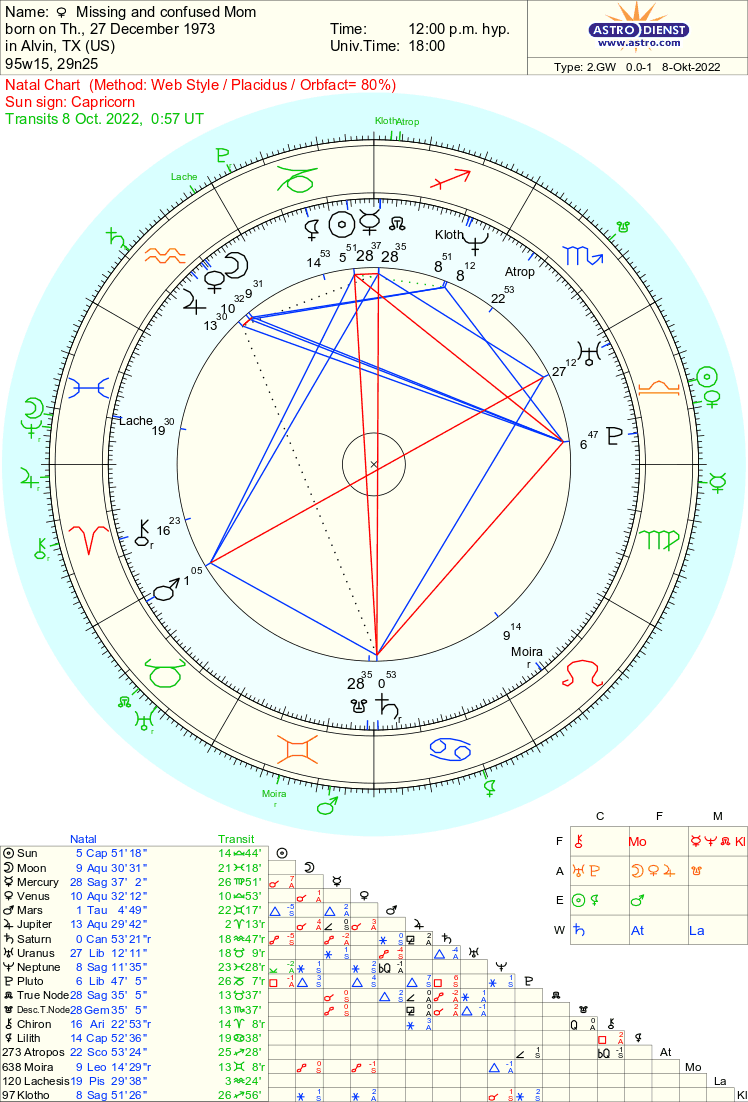 About the Cuban missile crisis chart, interesting Moon/Mercury/Saturn grand trine in Air, with a Mars/Saturn opposition running smack dab through the middle!
D

A new photo released by Texas EquuSearch shows Michelle Reynolds walking along Constance Street in New Orleans on Sept. 23 in the same clothes she was last seen wearing.

Tr Pluto squares her Uranus and Mars: /We pray for her safe recovery -

1 month from now is the US mid-term elections to decide which political party is the majority of congress: Dems or GOP? and right under a full moon on Nov 8th when the moon is in 15' Taurus opposite the sun in Scorpio. https://www.aol.com/finance/u-lucky-mild-recession-ken-183843954.html

What immediately springs to mind is the fact that the eclipse point is in the 8th house. In mundane astrology the 8th house shows national debt and danger to people through war, as well as public mortality, and the death rate in general.


Secondly, the chart is dominated by Mars, the Lesser Malefic, who is eclipse ruler, and Saturn, the Greater Malefic, ruling Capricorn the rising sign.
There are also two quite nasty fixed stars conjunct these significators. Mars is conjunct Al Hecka, in Taurus (which, by the way is natural significator of Russia). This is a violent star, portending accidents and misfortune. The other one is Castra, in Capricornus, conjunct Saturn, with a malevolent, destructive influence; It can show a violent, uncontrollable temper.


What is also noteworthy here is the conjunction of Venus to the eclipse point. Venus is in her detriment in Scorpio, (see Link) for remainder of article
and Note:
In his Annus Tenebrosus, William Lilly wrote about the impact of a solar eclipse in the first decant of Scorpio that: via Peter Stockinger Blog - "Saturn is located in the first house, in Aquarius, which is intercepted. The first house indicates the country and its inhabitants, their general condition of prosperity and health, or the lack of, as is the case, here. Mars, the eclipse ruler is located in the 6th house. In mundane astrology, this house signifies the working classes in general, but also the armed forces. It can also signify the nation’s food reserves, especially grains, and the farming industry in general."

Trump and his staff personally put together, boxed and sealed all of these documents when he left. He lied and said the Archives packed it.
D

This should be "interesting"! 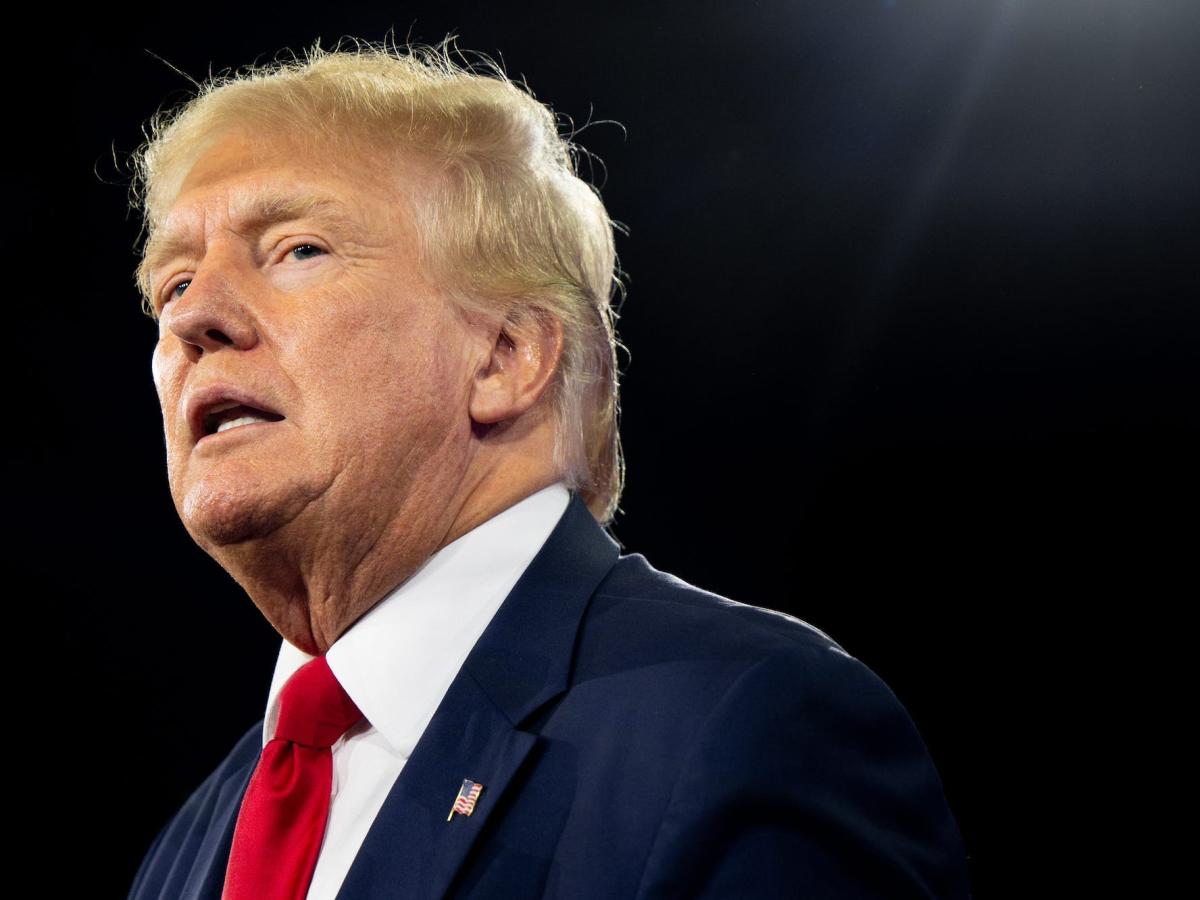 Kavanaugh must be jealous. He thought that was HIS job!
Last edited: Oct 8, 2022

THIS IS NOT A JOKE!! (but a REAL commercial Ad in Michigan): (check it out) Of all the 9 economic downturns in the last 100 years, the 2020-22 period is one of decline instead of a recession or a depression (and not just the US, the whole world...the EU, Russia, China, also the UK and former empire, and Japan never regained it's 1980s glamour). The entire world is having a lot of protests and demonstrations in virtually every country (the US and Canada included) in a post-COVID world...and the legacy of Trump and Biden alike is one of poor leadership by an egoistic maniac and the other of an incapability to clean up the mess. Does anyone believe the forces of Saturn in Aquarius square off Uranus in Taurus have a lot to do with the current economic and sociopolitical crisis we're having all over the world, esp the USA? The 1920 great panic, 1930-40 great depression, 1950 and 60 recessions said to be small or smaller, 1970-80 stagflation not considered a depression or a recession that is "not", 1990 and 2000 "mild-depends on who and milder-longer" recessions and 2010 great recession that didn't turn into another depression. This time, it's more of a permanent change for all of us in the world, and the USA is the lone global superpower to end up losing its status. The Aquarian-ruled Saturn and Uranus alignments are thought to play a role in predictive economic astrology is when will there be times of prosperity and poverty (and why the USA the most now). https://en.wikipedia.org/wiki/American_decline
Share:
Facebook Twitter Reddit Pinterest Tumblr WhatsApp Email Share Link
Top