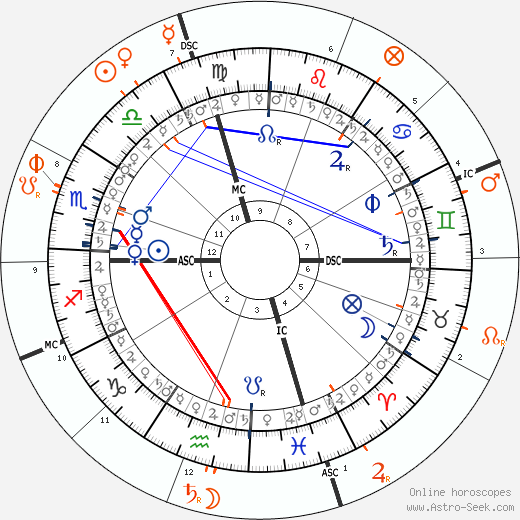 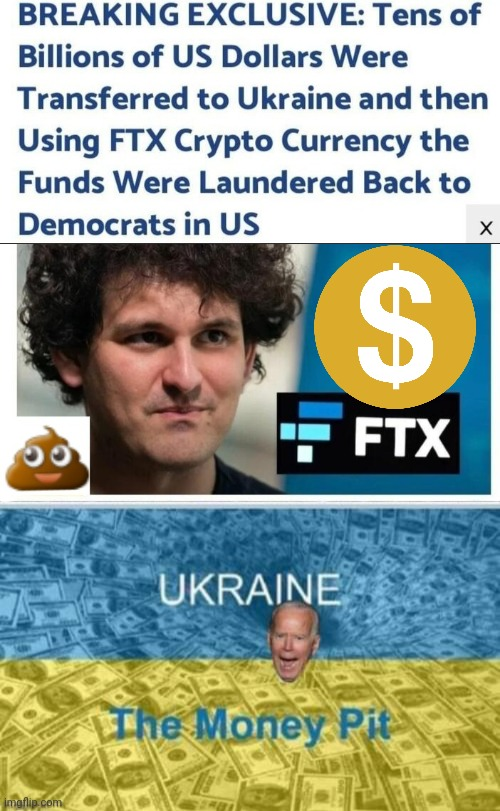 The Democratic party should reimburse the FTX shareholders with the fraudulent donations obtained
FTX donated $5,800 contributions, the maximum to Congressional Campaigns
- Bill Cassidy (R-MA), Collins (R-MA), Murkowski (R-AK), Sasses (R-NEB), Romney (R-UT), Burr (R-NC).
Money laundering at its best
10% for the '..big guy..'
you can bet the big guy is getting his 10%.
FTX Balance sheet contained investment called "..TRUMPLOSE.." Rinos who voted to have him impeached.
The Gateway Pundit, 11/17/2022
didn't just go to dems. It went to rinos and to certain people in the 3 letter agencies.
so many corrupt politicians on both sides of the aisle.

Mr. Bankman Fried looks like a frightened young man who is in over his head
and unable to get out of the situation he finds himself
and knows what's in store for him down the line
a WEF young leader. all as planned by the Mob
Look into who his parents are, and who his aunt is.
Sam's aunt is an epidemiologist for the World Economic Forum
He's not just a 20 yr old kid look at his parents and their connections
SBF grew up on the campus of Stanford where both his parents are Professors.
Stanford is one of the main recruiting campuses for the CIA
He knew what he was doing, what he did, and he gained more than you can imagine for them
The leg shaking is a self soothing behavior. He has Aspergers.
Repetitive motions are just part of it.
He's more nervous about having a conversation than he is about the topic of conversation.
or Sam is twitchy the way coke heads are twitchy. It also explains sleeping only 5 hours a night.
This "...billionare dressed in casual wear..." look is so over done now

SBF is a little pawn, knowingly or unknowingly,
in this “...problem, reaction, solution.."
Wouldn't be surprised if he was one of the purchasers of the paintings
that are alleged to have been painted by Hunter.
Lesson number 1: the government is not your friend

"...Power from any source tends to create an appetite for additional power.
It was almost inevitable that the super-rich would one day aspire to control
not only their own wealth, but the wealth of the whole world.
To achieve this, they were perfectly willing to feed the ambitions
of the power-hungry political conspirators
who were committed to the overthrow of all existing governments
and the establishments of a central world-wide dictatorship.." ~W.Cleon Skousen

re: Burisma -
Why is a CIA agent on the board of a company.

This, in itself, should be enough to invalidate and disband the Democratic party.

heard a liar, oops lawyer
say that ".. justice is for those with money.."

O'Biden is burnt toast.
Put a fork in the pedo traitor; he's done.
He was finished a long time ago when

IC; he should have retired but instead, stole the 2020
election.

karma coming to get him

& unexpected changes in his life.

Nobody ever liked this guy, he tried 3x to become POTUS & Failed every time.

H10 not good for a political career; he should have been an actor as he's the greatest liar ever.
Now, he's known as the most unpopular & disliked president ever in US History.
He's going to be arrested & convicted of serious crimes of treason, child trafficking, money laundering, tax evasion
& more.
If he had left politics during ingress of

H4, he would have quickly been forgotten.
Instead, he became a puppet to O'Bomber/Soros/NWO to gain the WH & now will be held accountable for his crimes.

will never let you escape if you break the rules. GROUNDS FOR IMPEACHMENT 10% FOR THE BIG GUY

Two almost three years after its arrival on the political scene
Hunter Biden’s laptop has been “..authenticated..” by CBS News
invalidating the parade of experts
Democratic operatives and intelligence officials who insisted the laptop was
a “..classic..” example of Russian disinformation
– a claim dutifully repeated by the mainstream news media.

bet Russia says to themselves we wish we were as powerful
as the American media and politicians make us out to be lol
many people were censored and removed from different social media sites
for posting this story.
How many can sue social media for defamation
and for kicking them off platforms for false reasons?
the computer shop owner, Mac, handed over a copy in 2019 to the FBLie.

So will this news lead to a far-reaching mea culpa from media entities
experts and commentators who got it horribly wrong? Don’t hold your breath.
Jimmy and his panel of Americans’ Comedian Kurt Metzger
and viral videographer Matt Orfalea discuss how
this classic Russian disinformation campaign
actually turned out to be regular old American corporate media disinformation


People who can afford to own multiple laptops
are the kind of people who dont care about losing a couple thousand dollar macbook.
Being a drug addict is only a minor reason to forget it
especially when said substance abuser uses stimulants.

.
PLENTY OF EVIDENCE FOR IMPEACHMENT

2023 House Hearings Galore!
The new house needs to move forward and mean what they say.
cancel those 87,000 IRS agents


Sherman Antitrust Act was a republican bill.
But it took a strong President (FDR) to actually go against big business and enforce it.
You can have all the laws you want on the books, but it doesn’t matter
if nobody is going to enforce them

Western European nations are beginning to wake up
to the fact that it'sa money laundering scam
they’re doing much of the sacrificing for the war effort in Ukraine
while the United States is reaping all the benefits in terms of natural gas sales
and the export of more and more weapons as the war drags on.
Wow! America’s been war profiteering since the war of 1898! Europe comes to the realization 124 years later
But with severe food and energy shortages, along with a cold winter, looming,
Europeans may decide they don’t want to suffer any more to feed U.S. profiteering.
Jimmy talks about dawn breaking across Europe
over what the Ukraine War has REALLY been about.
Ukraine was putting much of the "..aid.." that US sent into FTX,
which then donated to fundraisers for political parties - both of them.
Now you have another case of politicians in the US using a war to give themselves tax money.

Syria, Libya, Afghanistan, Iraq, Iran, Somalia, Ethiopia, Yemen, Yugoslavia
& many other countries destroyed
for the only goal of profiteering off of the death and suffering of hundreds of thousands of people
while the bankers and the corporations corporate oligarchs get richer
these wars ALSO created refugee crisis in Europe & created political instability AND STILL DO 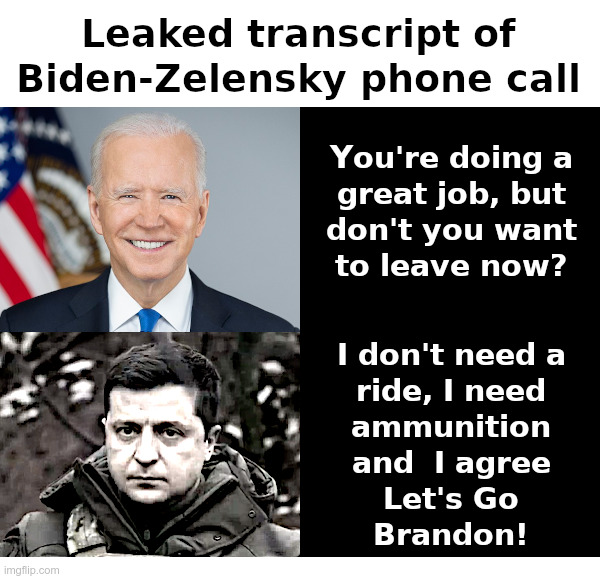 Of course they knew all along. The fact they are calling it out publicly now
means there are some issues behind the scenes
so maybe a road to peace talks now as EU can’t get their cut on this crisis 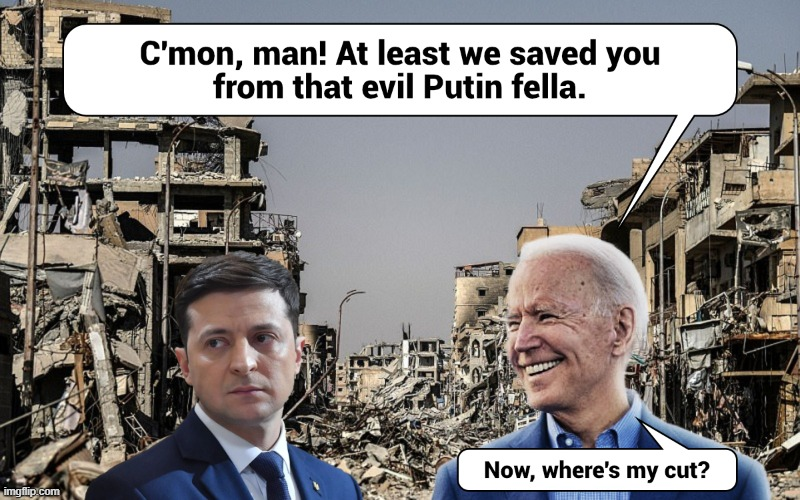