heavenzing said:
We have only been dating for a month and things are great. He seems like a great guy but there are some things that I just wonder about.

In general, he seems like a detached guy and does not care for much, unless it is about me. He has told me he's been through a lot of struggles in his life and that I am his only source of happiness.

Overall, can someone please tell me what kind of guy he is based on the natal chart?
Click to expand...

Pls let us have a complete all in one chart here to comfortably look at for replies to you - a chart with the necessary planet placement and house cusp and aspect table below - as this is necessary to call a chart a complete and readable chart.

If you have generated your chart at astro.com - pls safe it first as a file on your pc or cell phone and then upload here with the paper clip button next to the smiley. I always do it myself this way and never had problems. And compared with you and your age - I'm a dinosaur in technics and pc matters .
E

Actually I'm not sure you should be requesting a reading of someone else's chart, as a matter of privacy.
But more importantly, even if the chart says he is a wonderful person, you will have no idea how you and he blend together.
Ideally, you should do a synastry comparing your chart and his, so we can see how you relate to each other.
Z

what really would help- would be a complete chart - readable at first sight.

Sorry- but I get the impression that you don't know much about astrology yet (?) 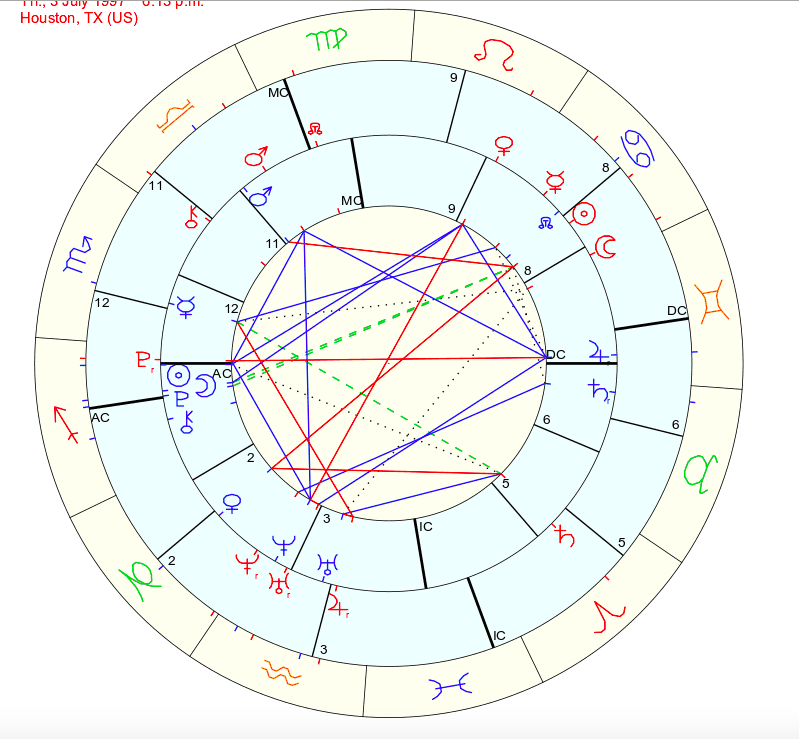 For accurate astrological help - astrologers need "a tool" - a complete chart - and without having birth data- you should pls provide a common complete and readable chart at first sight- with the grid below or left side with planet placements on degree- and house cusp list for the one person as the questioner inside the circle- table below. As you have the questions.

And if this is missing - this is the reason why a lot of users don't get replies. Thanks for your efforts.
Referring to the synastry chart you posted, let's take a look at what potential goes on between you two.
First two things pop out, one the close conjunction of the two mars. Mars being energy, both sexual but also life force, this is a very positive contact. Prince William and Catherine have this between them, and you can see how they are on the same energy paths, working together. That is how it manifests in its most positive way. Well done.
Secondly, you have almost the same ascendent. On the one hand this is positive, because you reflect each other, like a mirror. The down side can be that it becomes boring. Also, when negative transits hit the charts, you are both down at the the same time, just like you will be both up at the same time.
Also, your sun on ascendent means it is on his ascendent as well, which is another strong attraction and a contact that helps you relate easily to each other. You see yourself in your partner and can understand them instinctively.
Because you have a new moon natal chart, your moon is also on his ascendent, very psychic, intuitive. Very nice to have.
You have a pluto/sun conjunction, which is wide but it is still active. So this is a trait you are attracted to in a male figure, authority, strength, deep down understanding. And his pluto is exactly on your sun, so he fulfils this type of energy for you. It can also be sometimes overpowering, bossy, commanding, but it is tuned in to your own chart and what you need in the relationship.
These energies working out in the ascendent of both charts makes for a very intense attraction.
Having a sagittarius ascendent of course means a gemini descendent. Without a tie between the descendents and/or their rulers, keeping the relationship alive is hard work. In your case, both mercuries are in trine, which is perfect! It ties the descendents and also makes for communication between you two very easy, which is one of the most important contacts in a relationship, especially a long term one. Added to this is your Jupiter/descendent conjunction which automatically in this synastry means your ascendent ruler is on his descendent, another strong bond between you.
His sun is near your North Node, which helps each of you support the strengths of the other, and help each other grown, a connection that will grow in time because it is on north node.
His Venus trine your sun is of course a love/friendship aspect, he will tend to feel and show love towards you instinctively, Your Venus is in wide inconjunct with his sun, so this energy is also present in the reverse, i.e. you to him, but it is not as comfortable a contact. Your way of expressing it to him is slightly off with respect to what he recognises, so you have to work a little at it. And confirming this is the square of your Venus to his Saturn, so when you want to express your love and affection to him, he seems cold and not receptive. This blocks your expression.
His Venus sextile your Jupiter and trine your ascendent and planets there will help a lot to soften this.
His Venus on the other hand opposes your Neptune, so tends to idolise you, overly so, in a way that he really might not see you for the way you are. This is where the mutual ascendents with the conjunctions there, and the mercury trine, will save the day. While you seem to evade him, he can instinctively pick up on your signals through the other positive aspects.
If we move to the composite, there is a sun/moon conjunction which is perfect for a romantic couple, and marriage. The male and female, the emotion and the ego, all blend together. Mercury is close by, picking up on the trine we saw in the synastry.
Mars is nicely aspected and Saturn does no damage.
Venus is the weak spot, with basically one aspect, that being the square to Neptune, which again reflects what we saw in the synastry about illusions. As long as the illusion lasts, things are fine, it is when the bubble pops that you start to see things in a more realistic way and might be disillusioned with what you see. However, the other positive aspects here will go a long way towards overcoming that and supporting the relationship.
All in all, this is quite a nice match of energies.
If you look at the synastry chart as a simple design, you see the red lines and the blue lines, and they are pretty much balanced, one doesn't outweigh the other. And this is very good, if there is too much red, i.e. stress, the relationship can easily crumble to too much negativity, but also if there is too much blue, you will just die of boredom!
Nice going, heavenzing!
Last edited: Jun 21, 2021
Share:
Facebook Twitter Reddit Pinterest Tumblr WhatsApp Email Share Link
Top