They already fire-bombed many pro-life offices, left death threats to staff, tried to assassinate Justice Kavanaugh & have
threatened the lives of all the Conservative Justices

The left are a violent mob who burn, riot, destroy, hurt & kill when they don't get their way...on anything.

They have NO respect for the law; it's their way or they will kill you. Literally.

Will we face another summer of destruction like 2020 where they set fire to many small businesses, federal buildings, police cars, citizens'
cars, police stations, etc. Will we face another 2 BILLION of property damage & 50 people murdered by the lunatic left & will the Demonrats
continue to incite this violence & bail the murderers out of jail so they can go out & kill again?

There is great fear by law enforcement that the mob will kill the Justices so they will likely have to leave Washington right away
after the decision is made. They will have to move the Justices to undisclosed locations so the unhinged mob can't get to them.

It's a sad day in America when the criminal, violent, lunatic left threaten the safety of every Conservative, every pro-lifer & every
Republican. They feel justified in their rage because they believe that any baby should be killed at any time, at any period of growth
whether it's one month, six months, nine months or even as the baby's head is crowning. They are enraged that SCOTUS may overturn
Roe v Wade to allow the individual states to decide their own abortion laws.
They demand the right to kill babies anytime, anyplace, anywhere they & have no respect for life or the law.

Barricades go up around the Supreme Court ahead of possible Roe v. Wade ruling​ 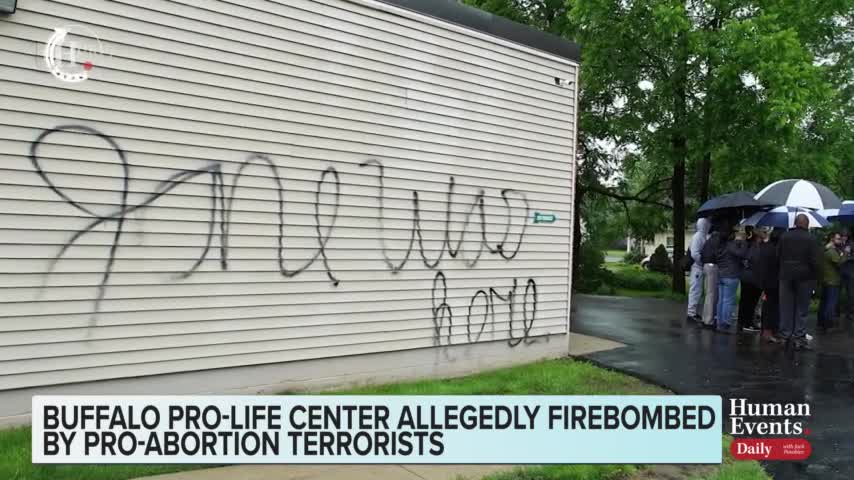 Jack Posobiec on pro-abortion terrorist group "Jane’s Revenge": "This is a movement that is breaking out nationwide ... They are conducting attacks on pro-life centers."

For humanity’s sake I hope you are wrong.
B

dr. farr said:
For humanity’s sake I hope you are wrong.
Click to expand...

The left have already started the violence & the decision hasn't even been released yet.

Jane's Revenage is the same mob of Antia thugs, Democrats with BLM actvists who turn to violence when they don't get
their way. They are nothing more than a domestic terrorist organization & their tactics are to destroy, attack & kill anyone
who gets in their way.
B 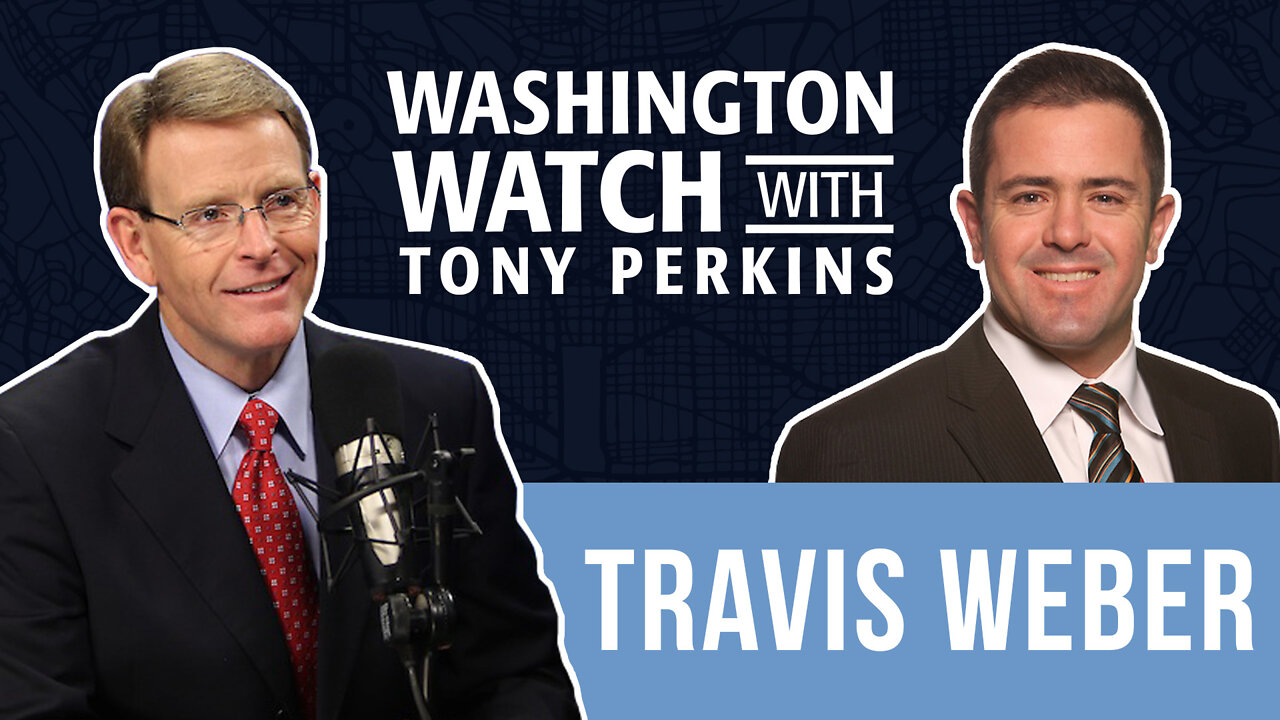 Majority in US say wrong to protest at justices’ homes, Dems disagree​

Most Americans believe it is inappropriate to protest outside the homes of Supreme Court justices — as do a majority of Republicans — while 58% of Democrats say they see nothing wrong with the demonstrations, according to a poll.

The survey, conducted by Fox News after an armed California man was arrested at the home of Justice Brett Kavanaugh, found 55% of registered voters think the protests are inappropriate, along with 70% of Republicans and 62% of independents. 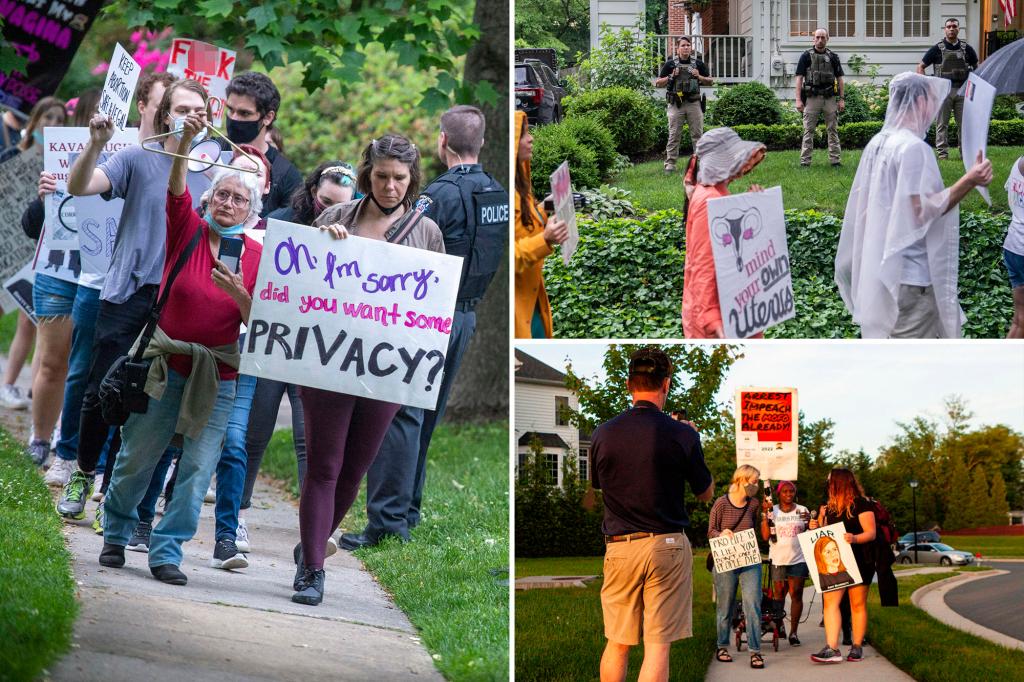 Majority in US say wrong to protest at justices’ homes, Dems disagree

Ruth Sent Us is a far-left group dedicated to launching protests against U.S. Supreme Court Justices who may vote to overturn Roe v. Wade, a decision that recognized a constitutional right to abortion. The group is named as a reference to the late Justice Ruth Bader Ginsburg, despite its Facebook group stating, “We acknowledge that Ruth Bader Ginsburg was racist and was also an iconic feminist!” [1] Ruth Sent Us intends to “defeat fascism” through protests that declare: “trust women,” “Black Lives Matter,” “Love is Love,” and “No Human is Illegal.”


Ruth Sent Us advocates for the arrest and prosecution of “divisive, corrupt and illegitimate Republicans,” including “Trump, his criminal family, politicians and Supreme Court justices.

They get their funding from BLM/Democrat Party.
B

In part, Cotton wrote, “Houses of worship and pro-life pregnancy centers are under attack.”

Pro-abortion radicals have issued a new threat and declared "open season" on crisis pregnancy centers that provide essential resources to women, demanding that they close their doors or become a target of attack.

The name of the radical group has been found spray-painted at the site of attacks against crisis pregnancy centers, churches, and other pro-life groups.

'We Are Everywhere': Radical Pro-Abortion Activists Admit to Firebombing Another Pregnancy Center​

CompassCare, a Christ-centered organization dedicated to erasing the need for abortion, said it sustained heavy damage to its building. The abortion terrorist group Jane's Revenge took credit for the attack, spray painting their signature "Jane Was Here" on the side of the structure.
B

Schumer incited violence with his disgusting attacks on the Supreme Court.

During a speech about the abortion case before the Supreme Court, Senate Minority Leader Chuck Schumer (D-NY) stated to Supreme Court Justices Neil Gorsuch and Brett Kavanaugh, “you have released the whirlwind and you will pay the price. You won’t know what hit you, if you go forward with these awful decisions.”


Schumer accused of threatening Kavanaugh and Gorsuch during rally​

Try to stay safe, Americans. It could be a rough week-end.
B

I just quickly composed a chart when I heard the great news, great victory for those of faith, those red states that value life,
particularly of the unborn who are the most vulnerable of all. Finally, after 50 years, the PEOPLE have a say in whether a baby
is murdered or not.

NOT a good chart for compromise. The lunatic left are going to burn the country down again.

The people are rebellious

How many weeks or months will the violent mobs be allowed to commit felony crimes! At least until JUly 4th, Independence Day
& probably longer. Maybe another summer of 'mostly peaceful protests' as they burn, bomb, destroy.


THE MOB RULE NOW IN EFFECT WITH THE LUNATIC LEFT.
THEY HAVE NO RESPECT FOR THE LAW, EVEN IF IT COMES FROM THE HIGHEST COURT IN THE COUNTRY.

Millions of women in the US will lose the legal right to abortion, after the Supreme Court overturned a 50-year-old ruling that legalised it nationwide.

The court struck down the landmark Roe v Wade decision, weeks after an unprecedented leaked document suggested it favoured doing so.
The judgement will transform abortion rights in America, with individual states now able to ban the procedure.
Half of US states are expected to introduce new restrictions or bans.
Thirteen have already passed so-called trigger laws that will automatically outlaw abortion following the Supreme Court's ruling. A number of others are likely to pass new restrictions quickly.

(We've waited 50 years for this great Victory to protect the unborn).​

It's gonna be cruel, cruel, cruel summer...of racial, political, economic class, LGBTQ rights and now women rioting, protests, strikes, boycotts and standoffs. Trump could be put on trial, WW3 continues to be possible (the Ukraine-Russia war), the decline of our middle class, the "rainbow scare" stirred by the religious and Alt right fringe, and BIPOC (Black, Indigenous and People of Color) vs the white privileged majority to have long racialized them. Abortion has been legal in my state CA since 1967, it has a trigger law in case anything of the sort happens, and now in our state constitution as a human right.
B

SCOTUS cannot create laws only Congress can.
SCOTUS only decides if laws are Constitutional.
So what have we learned?
Right to keep and bear arms IS in the Constitution, abortion is NOT.
Kindly stop pretending they are identical issues being decided on.
B


Precisely. Roe was utterly and completely made up by a very liberal court out of whole cloth.
In contrast the #2A is an EXPRESSIVELY inherent protected right in our Bill of Rights.

SCOTUS cannot create laws only Congress can. SCOTUS only decides if laws are Constitutional. So what have we learned? Right to keep and bear arms IS in the Constitution, abortion is NOT. Kindly stop pretending they are identical issues being decided on.
B

BREAKING: Rep. Maxine Waters says "to hell with the Supreme Court, we will defy them!"


Whenever the Dems don't like a decision from any court, including the Supreme Court, they act violently, illegally & unlawfully
They are incapable of accepting defeat.
B

CapAquaPis said:
Abortion has been legal in my state CA since 1967, it has a trigger law in case anything of the sort happens, and now in our state constitution as a human right.
Click to expand...

That's exactly how united states works, that each individual state make up their own abortion laws. Many red states, which are faith based
& believe abortion is murder, will now have the legal right to ban it outright or ban it after a certain time.
The blue states like CA, NY, RI, MA, etc will continue to have abortions right up until the 9th month so no woman will be denied an abortion
anywhere in the country. If they live in a red state that bans it, they can go to a blue state & get a legal abortion. Planned Parenthood has
offered to pay for their car/bus/plane fare which is only fair since all taxpayers are forced to give billions to this death cult group.
Majority of abortions are already done in blue states so don't know why the Dems are freaking out & causing such havoc; they
will still be able to abort babies as long as that's what the people in those Dem states want.
Calm down lefties & stop the violence & the attacks on churches & pro-lifers. You only show the world that you are a lunatic mob.

After last night’s #Antifa violence in Portland over #RoevWade, they are promoting another violent direction for tonight at 9 pm at Grant Park. They’re using the threat slogan from Jane’s Revenge on the flyer.
The far-left violence witnessed in American cities overnight is built on the violent networks, tactics & alliances that developed in 2020. Abortion is only the latest excuse being used. This is a long-term insurrection.
Share:
Facebook Twitter Reddit Pinterest Tumblr WhatsApp Email Share Link
Top