passiflora said:
The J & J charts have frustrated me terribly - multiple formal meetings which seem to be predecided, and the CA governor announced even before the FDA.
Click to expand...

Why not wait until the FDA formally and officially approves its emergency use? I think they're still having meetings about it.
D

passiflora said:
The J & J charts have frustrated me terribly - multiple formal meetings which seem to be predecided, and the CA governor announced even before the FDA.
Click to expand...

Why not wait until the FDA formally and officially approves its emergency use? I think they're still having meetings about it.

Edit: Just checked, and the FDA approved it today.

Not sure of the exact time though.

In my understanding, as per the above chart - the FDA did formally okay the drug. They will talk again, but not to disengage that drug from use.


I would not have posted it had it not been reported a formal okay, afterall, it is like a Date of Birth in a natal chart - but I also thought I heard they will be speaking again next week - but I don't recall about what. Perhaps delivery -


US regulators have formally approved the single-shot Johnson & Johnson coronavirus vaccine, the third jab to be authorised in the country.
The vaccine is set to be a cost-effective alternative to the Pfizer and Moderna vaccines, and can be stored in a refrigerator instead of a freezer.


President Joe Biden hailed it as "exciting news for all Americans, and an encouraging development", but warned that the "fight is far from over".
"Though we celebrate today's news, I urge all Americans - keep washing your hands, stay socially distanced, and keep wearing masks," he said in a statement.


The vaccine is made by the Belgian firm Janssen.

According to my chart and the time I used (because as I already said, I had the TV on when they announced it) -

The POF is conjunct the Sun - The 6th house is full - and overall the chart looks what I'd expect for a new vaccine and millions of sick people all over the globe. With the cusp of the 4th house at 29 degrees and opposing Mars - I take that as the criticalness of the situation, towards working for mankind's healthy physicality (Mars at the MC)
the Moon is bi-Quintile (a creative positive aspect) to Mercury (lord of the Ascendant) and this is the day of Saturn, with Aquarius Saturn in the 6th house. What more would we expect?

I found a few links which may explain what they intend to discuss next week:

I think anyone offering to help and posting a chart that is "reasonable" should be thanked, (period)

As I posited, the time I used seemed "reasonable" and may even be a few hours earlier then others, but then again, I'm rather looking for it during the day when the news broke.

Maybe that's just my own method of behavior and I should NOT have the same expectations of others. Sorry if anyone felt insulted by my expectations.

caveat: as long as the person does not give the appearance of "ill intent" of course.

Is this more to your liking?

The Inventor of Vaccines:


Edward Jenner
Physician
Edward Jenner, FRS FRCPE was an English physician and scientist who pioneered the concept of vaccines including creating the smallpox vaccine, the world's first vaccine. The terms vaccine and vaccination are derived from Variolae vaccinae, the term devised by Jenner to denote cowpox. Wikipedia
Born: May 17, 1749, Berkeley, United Kingdom 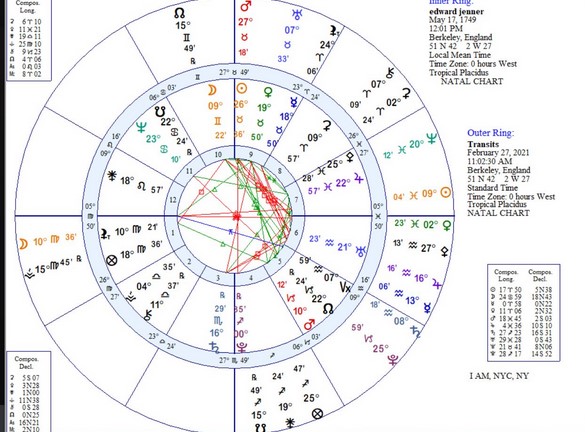 I don't expect any thanks for declining to cast charts for the multiple announcements I heard BEFORE your posting which didn't meet my quality standards. Thank you for posting though. I've appreciated our discussion and hope you are able to make a safer choice.

Passiflora: I do understand,believe me, in wanting only a quality chart. I think Jenner's meets this stricter criteria too.


Actually, your post reminded me of the late astrologer in Australia very popular man who passed a few years ago and is greatly missed by most astrologers.

He too could hit the ceiling IF a time of birth was the least bit questioned.

His name was Ed Tamplin and he had a wonderful Blog for Mundane Astrology which was extremely popular. Perhaps 2 years or less before he passed away, as we were FB (friends) I did a chart for HRC for her run for the Presidency. I used the popular tob then, which I must have gotten from astro.com.....but I wasn't "1,000% positive" it was correct and said so.


Ed had a sh-- fit over it. I don't think we talked since. As it turned out, the tob was eventually rated DD -

So I can understand how some astrologers are....and I personally am not that way, BUT, I do understand their higher standards too and think no less of them for it.

He stopped posting his popular blog in October 2019 - (and his last on FB) and died of brain cancer only weeks thereafter . Rest in Peace ED -


I still have people messaging me asking for his Blog, which is no longer available, except perhaps from a site like Wayback Machine?

passiflora said:
Haha, I remember that story! Yes, he was an excellent astrologer. Thank you for sharing his natal chart. Makes sense that he has Neptune conjunct Saturn and Pisces at the MC. I was fully expecting to see a Neptune that took serious effort to manage, because that's the case with my chart (Neptune cazimi, squared by Saturn, and it disposits my SN).

No intention of being persnickety towards you personally leomoon.
Click to expand...

I think at the time of his upset, I checked out his chart and honed in on his Pluto aspects. Neptune-Saturn in the 5th house opposite my Uranus in the 11th & NN.


But his Pluto semi-square his Sun, squared Venus semi square Mars in Cancer (in fall), so might explain the earlier death too.

For sure he was low on patience, (which, btw is a virtue that doesn't come easy to any of us, as I worked on it for years) - but with his Pluto in the 3rd of communications, and Algol Rising - he doesn't "suffer fools well". I should say, "didn't"....

For those others reading and interested in Mundane Astrology - and Ed Tamplin - I found his blog through Wayback Machine archives:


He passed away before the Corona Virus was known about but there may be other archived articles he did that relate to known viruses (SARS) for example.
Last edited: Feb 28, 2021

Here is an article about a book that Barbault wrote before his passing. It speaks of viruses not unlike the Black Plague, visiting us perhaps in 2020-21 during a certain peak of influences:
Pandemic 2020-2021

This was written by Andre Barbault in 2014 in his book La seconde guerre mondiale on page 144-145:

"The Saturn-Plutonian tendency, which Jupiter amplifies here for his company, is added by his affinity with the shadowy values ​​of fall, of chasm, but of elevation of dark, underground or other forces of destructive hue. The individual is subjected to chills, obsessions of denial, of humanity that regrets, enters darkness and debases. We are also led to fear a new danger of a pandemic: the terrible “black plague” of 1347-1348 carried this symbol, although we were not in the state of therapeutic defenselessness of that time … In any case, nature itself is at risk of being a kind of chaos source of a different order, causing, for example, serious geophysical disturbances."
Click to expand...

“Going back to pandemics and going back the past century, the four crises of 1918, 1954, 1968 and 1982 are obvious, the two considerable having been the first, the famous” Spanish flu “which is said to have caused 25 millions of deaths, and the last one where AIDS took hold, which is even more devastating and continues to be deadly. Since then, there was also a slight influenza outbreak in 2009, all against the last lowest cyclical index ( 2010). We may well be in serious danger of a new pandemic at the cap of 2020-2021, at the lowest point of the cyclical index of all this 21st century,
Click to expand...