virgovenusleomars said:
Thank you for your reply, I was just mainly wondering what the effect of Jupiter in a cardinal sign in the critical 26th degree means. I couldn't find any information on why the 26th degree would be critical or special for cardinal signs. That's why I wanted to know what the effect of the 26th degree can be. I know that one aspect or placement might not weigh so much in comparison to the whole chart but since Jupiter is part of a stellium and in it's widely accepted exaltation it can have something interesting to tell.

I have always wondered what my 11th house stellium squaring my libra moon(which is also part of a grand trine) would mean:

My 11th house cusp is at 1'16 degrees in cancer and my stellium is at the end of it. It consists of Mercury 20 degrees cancer, Sun 24 degrees cancer. Jupiter 26 degrees cancer and Mars 2 degrees leo. (I also have the asteroid Vesta in there at 27 degrees cancer). All of these planets are conjuncting eachother at 4-7 degree orbs except mercury and mars.
Then we have my libra moon at 25 degrees in the 3rd house. My 3rd house cusp is in libra at 23 degrees. And my libra moon is squaring all the planets in the 11th house all around 6-0 degree orbs. The most exact aspect is square sun at 0°53 and square jupiter at 1°08. My libra Moon is also a part of a grand trine with Uranus in Aquarius in 6th house (Uranus 28 degrees) and Saturn in Gemini in 10th house (Saturn 23 degrees).

I've never understood what the effect of libra moon in 3rd square a whole 11th house stellium would mean. Because both houses are the houses of friendships so would it entail problems with friends or other people? All I could figure out from looking at my own life is that because of my 11th house stellium I care too much about what other people do, and because all of those planets are squaring the moon I feel a lot of emotional pain because of it. But it feels like I'm not liked in the way I want to, is that true or is it the moon making me feel that way. Also I have a virgo rising and venus conjunction (venus in the 1st).
Click to expand...

Oh, you were born in 2002. When the Sun was in the 25th degree of Cancer [as I assume that you mean that the Sun was at 24° Cancer and so many minutes and seconds of a degree too, in addition? ] Jupiter was in the 27th degree of Cancer and not the 26th. But then again it's hard to figure what degree exactly was meant by the initiator of this thread. i.e. FullMoonLibra, and that person hasn't visited this forum since November of last year. But even if the Sun was in the previous degree Jupiter was still in the 27th degree then, too.

This was a thread best left buried and forgotten and it was the relatively new member Humanitarian that revived it and that member also revived another old thread in this very same sub-form since then and neither is actually relevant to what this sub forum was rededicated as to, i.e. strictly Degree Symbols, i.e. those that come from a set, be it the Sabian Symbols, those by Chrubel, those by Kozminsky,, and the different interpretations some various authors have given the Sabian Symbols. IN the early days of this forum pretty much anything that had to do with any specific degree of the Zodiac wound up here ...such as this inane nonsense.

There are no critical degrees, in general, possibly to an individual chart due to it being the point of square in aspect to a Stellium, a point in a natal chart that is part of a Grand Septile, such as is found in the birth chart of Jesus/Yeshu'a of Nazareth...the one I contend is that natal chart, anyways... ... nor are there any exalted degrees, in general, either.
The last degree of any Sign is known as the anaretic degree and there's good reason for being so called. Read about what that is all about, if you don't know already... but I don't give it as much notice as others believe it should, and my Jupiter is in the last degree of Taurus.

An ex-girlfriend, someone I was almost engaged to, whom I was dating the very year my brother first started studying astrology has Moon in the last degree of Capricorn. When my brother cast her chart and wrote me back, He said that the Moon being in the Sign of its detriment and in the last degree of Capricorn was an indication that she very possibly was a "barren woman".
...and you know what? He was right. She tried to get pregnant a number of times...maybe continuously, and blamed me for, what she believed, my having a low sperm count due to my smoking so much cannabis, at the time [I used to smoke it a lot. In fact a room mate back in 1977 said to me...after living in the same house with me a a couple of others for about 6 months, "Every time I see you, you are either smoking dope, rolling dope, or cleaning dope"... I hardly ever even touch the stuff nowadays... now that's it's legal too... I've yet to purchase any legally either [that just feels to be too strange, so I likely never will. ] Some years after she and I broke up I found out from her older brother that she was found to have a womb so scarred that she could never conceive. [while the surgeon was "in there" for some other physical problem,nothing serious at the time.] She wanted children so much too... I felt terrible for her...but when the invitro process was perfected she managed to have three kids, twin boys and a girl with her husband. Those kids would be grown by now, at least 29 or 30 years of age. My brother said to me at the time that she has the most earth in a natal chart that He'd ever seen...that was in 1983, and to this day neither of us have ever seen another chart with as much earth in it. Taurus Sun Virog Asc. Capricorn Moon, Venus in Taurus

So as far as there being any such thing as a "critical degree" the 30th degree of Capricorn does seem to be a bit harsh to a natal Moon that is born there.

...but that's the only degree of the Zodiac that I know of... and only in that particular situation. 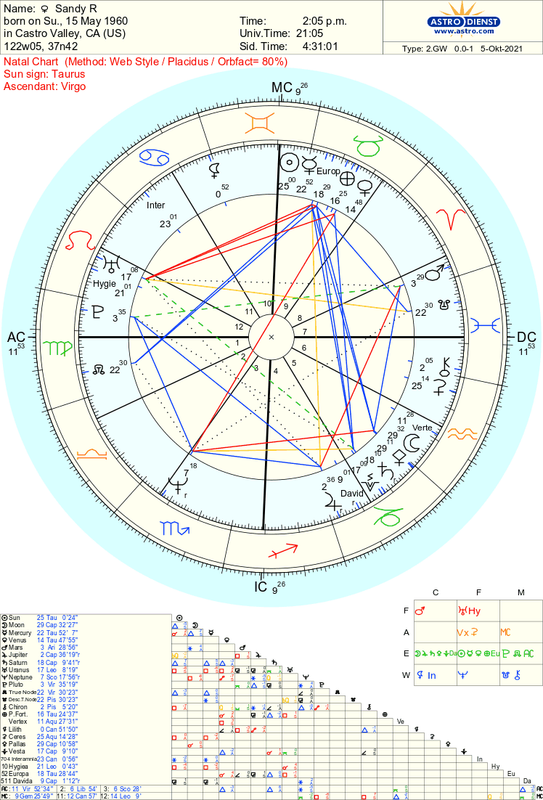 My, and I now realize that she has Her natal Sun in the 26th degree of Taurus...
Nothing wrong with that gal... she was quite the athlete in her day. She stood 5' 9", an inch taller than me, weighed in the 140 and up range... made the position of short stop for the all star team of the womens' softball league of Lake Tahoe back in the 80's...and those Tahoe Leagues both men and womens' have a lo t of Olympians that play in them...as the High Sierras' is a popular place for such athletes to train...higher elevation enriches the blood with more oxygen. Sandy could throw harder to first base than about half the guys that I knew. That I met Her in the pines above Tahoe, seems fitting for such an earthy person.