They're already "debunking" that expression, so their guard is up for that one. They're using the CDC definition of a "vaccine", which is so broad it includes the mRNAs.

The ORIGINAL idea was, that the mRNAs were an emergency, stopgap way of lowering the number of fatalities until NATURAL IMMUNITY enabled the population to achieve Herd Immunity.

The ONLY way to achieve Herd Immunity is through NATURAL IMMUNITY, obtained by enough people catching and recovering from an infectious disease as a percentage of the population..

The combination of the relative mildness of Omicron symptoms and its ability to spread so rapidly is what will eventually lead to Herd Immunity.

Unfortunately Elmo was just diagnosed with myocarditis.
His heart exploded while doing a public service announcement.
It was very tramatic for the children in attendance.
Luckily they rushed out the drag queens to distract them

probably because the vast majority of us recover so quickly​

that the T-cells do not have time to mature. ​

So, if the powers that be knew that we would never have sterilizing immunity ​

why was the public sold the idea that we could wipe this virus out through vaccination?​

Why are we still giving boosters with same antigen? ​

Once we admit that such circumstances are all insidiously deliberate and by design
we'll be beginning to comprehend what and '...WHO...' we're up against

Ontario Canada biggest population in both the hospital and ICU are the boosted.
The second biggest population are the vaccinated but not boosted.
wonder if all that talk about immune system rebound
and a failure of the immune system after the initial boost wears off was true
The people behind this aren't stupid
they know these things are happening and they want it to continue.
The chaos that comes from this opens the door to that Great Reset
and the return of a serf class on a global scale.

after 30 years we all know about antibiotic-resistant bacteria
we know that it's difficult if not impossible to vaccinate against respiratory viruses
yet, when covid comes around
"...science..." goes all in for doing what it seems like it should know isn't going to work.

Then Geert comes along and his predictions seem to be coming true
at least...75% accurate at a rapid pace, but we're still inundated with propaganda
for the same vaccine we started giving out 18 months ago
that...is it even doing ANYTHING at this point?

If omicron is milder (the one point Geert may have gotten wrong last year?)
then how can anyone even say "...Thank goodness I had the V, or it would've been so much worse...!"

Even early on they told us most people would experience it as a "...bad cold...".
now, it seems like everyone (98% vaxxed and boosted)
who hasn't had covid yet is getting it -definitely unseasonably.

hearing of more "...adverse events..." that may or may not be related to the V.
but, along with people getting sicker with colds/flus, too
it just seems like this whole thing has gone off the rails.

The greatest tennis player of all time being denied entry to the U.S. Open coz he won't get the clot shot.

Australia banned him too & denied him a chance to win that final.

Wimbledon (UK) allowed him to play & he won another Grand Slam!

Now, he's fighting to be allowed the opportunity to play in the last Grand Slam of 2022.
It looks pretty hopeless, the tyranny & the hypocrisy of the O'Biden NWO Regime who are even pushing the death jabs
to babies.

These people are so evil beyond words.

Texas Senator Drew Springer who come out into the open and strike a shot to the head of state Joe Biden.
Springer wrote sarcastically on Twitter:

"Biden bans Novak Djokovic from coming to the United States to play the US Open, but he allows millions of unvaccinated illegal immigrants to cross the border. Hey Joe, how about another unvaccinated person?"


Senator Paul is also on Djokovic's side​

In addition to Drew Springer, his colleague Rand Paul also stood up for Novak Djokovic.

The Republican senator, like Springer, used Twitter to express his support for the Serbian champion regarding his arrival in New York to play the US Open:

As things currently stand, the chances of Novak Djokovic playing the US Open 2022 are close to zero

I've only heard about the vaccines containing microchips from vaccinated people telling me I believe that. Weird. Anyway....

UK Subscribers Should Record It for the Archive. We’ll Be Using It in the Near Future. 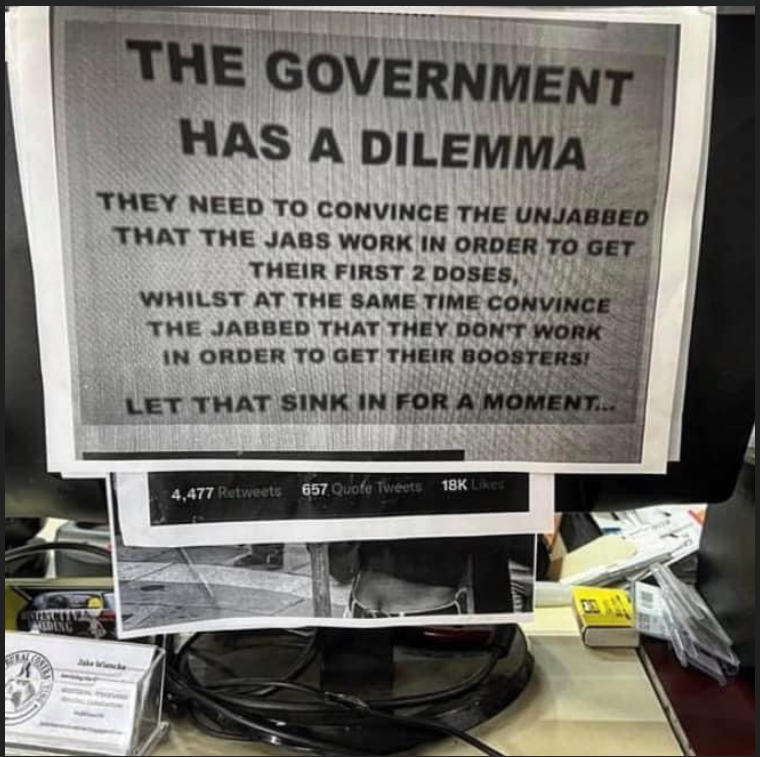 There's a new type of Covid vaccine on the horizon, struggling towards development and use. It's a simple nasal spray, which targets the virus right at its point of entry into the body.

It's a "real" vaccine, nothing about genes or vectors. Sounds good for stopping this pandemic nonsense, but very bad for the Pfizer and Moderna profiteering. For that reason, it will most likely never receive FDA approval.

You may still be worrying
about the latest COVID variant sweeping the globe
but have you considered that maybe
you should also be concerned about monkeypox?
One viral TikTok featured a woman who claims to have contracted monkeypox
but who says she got no help from her primary care physician, a dermatologist or the CDC
so if you get it, you may be on your own.
Meanwhile, Dr. John Campbell notes that the same Wuhan lab
identified as ground zero in studying coronavirus
was also the source of research on monkeypox prior to this latest outbreak


the monkeypox threat and what the odds are
that two separate pathogens like COVID-19 and monkeypox
could have been the subject of research at the same lab.
D

In the U.S. since late February this year versus now, there are currently 3 times MORE positive cases reported, but 6 times FEWER Omicron-related fatalities reported.

Which means Covid-19 is 18 TIMES LESS DEADLY now, than it was 6 months ago, including those who are vaxxed and boostered, those who are partially vaxxed, and those who are unvaxxed. This also includes a STEEP drop in the rate of vaxxing.

Which means Covid-19 is 18 TIMES LESS DEADLY now, than it was 6 months ago, including those who are vaxxed and boostered, those who are partially vaxxed, and those who are unvaxxed. This also includes a STEEP drop in the rate of vaxxing.

But but but...our health ministry is holding a press conference tomorrow to announce the new vaccine strategy because covid is so bad here! 406 people hospitalised with/because of covid - they don't differentiate.

Apparently only 5% of people have got their fourth booster.
D

Oddity said:
But but but...our health ministry is holding a press conference tomorrow to announce the new vaccine strategy because covid is so bad here! 406 people hospitalised with/because of covid - they don't differentiate.

Apparently only 5% of people have got their fourth booster.
Click to expand...

• Reported, active Covid-positive cases are 1/3 of what they were last April.

• Reported Covid-related fatalities are now 1/7 of what they were then.

• The reported rate of vaxxing is at its lowest since last January--extremely low.

The health authorities in Canada are derelict of duty in continuing to insist that vaxxing is a public health necessity.

They're also immune to health-science and accountability.
Last edited: Jul 22, 2022

Marjorie Taylor Green is such a refreshing, honest voice in a sea of corrupt liars
MTG is a great example of a regular, honest, brave, intelligent person battling for truth

JUPITERASC said:
Marjorie Taylor Green is such a refreshing, honest voice in a sea of corrupt liars
MTG is a great example of a regular, honest, brave, intelligent person battling for truth


They say "...pro-choice..." because it sounds better than pro-abortion
and they say abortion because it sounds better than child-sacrifice.
Pretty much everyone uses the rare circumstances as the main argument
but they just want the easy out for unintended consequences of casual sex
and they use the rare circumstances as a shielding arguement
Click to expand...

They call God's abortions, which account for about 25% of pregnancies that don't result in a live birth, "miscarriages", because it sounds better than "God's abortions".