Asperger's / autistic traits in the chart

Hi. I have been reading this thread and rather interesting. I was diagnosed with Aspergers 2 months ago. If you wish for my chart it is attached.

Hi Miss Scorpio,
I've just seen your post to this topic and thank you for the chart information.
There are some interesting natal aspects that could find an association with Aspergers syndrome.
You are now 40 years old. May I ak if there is any reason that it took so long for a diagnosis to be established and upon what traits it was based? I am wondering in what respect the sec. progressed and Solar Arc positions play their parts.
Is the diagnosis welcoming to you in that it provides answers to those questions which long concerned you?

What an interesting thread! I used to do this with my kiddos when I worked public school, and I found all of them had a fixed sign in their top three (Sun / Moon / Mercury), or were mutable. Capricorn or Saturn influence was common as well.

Premium Member
I have OFTEN seen a combination of lilith, chiron, saturn in the third, as well as Mercury R or a Retro ruler of third and especially w saturn or uranus related aspects to be the case here.

I have saturn and lilith in the third and I have 12 out of 15 symptoms of women on spectrum myself.

Hkk said:
I’m learning here so giving my educational guess lol maybe mercury ret in Virgo or Gemini? Only reason I say is my nephew has autism and he has merc ret and is a Virgo however not fully looked at his chart. Scorpio south node can give mental problems from other charts I’ve seen and again this is not looking at the overall chart!
Click to expand...

yes, two relatives of mine who def are on spectrum are mercury R in gemeni and virgo respectively.

Giti said:
I have OFTEN seen a combination of lilith, chiron, saturn in the third, as well as Mercury R or a Retro ruler of third and especially w saturn or uranus related aspects to be the case here.

I have saturn and lilith in the third and I have 12 out of 15 symptoms of women on spectrum myself.
Click to expand...

I am on the spectrum (officially diagnosed two years ago) and I have Lilith on the 3rd House. Saturn conjunct Uranus on the 6th House. My 3rd ruler-Virgo is Mercury placed on the 8th House. I could never imagine that Lilith would be relevant in ASD cases.

This little boy is only 12 years old, but he will start college at ASU this fall:

he will begin studying biochemistry at Arizona State University. Monty is a "twice exceptional" child, his mother said. He’s been diagnosed with ADHD, autism, seizure disorder, and has a connective tissue syndrome.

“I also have a dilated aorta, which could possibly kill me if it gets too big, but honestly, I don’t care as long as I try my best,” Monty said.


The article said he celebrated his 12th birthday on Thursday, which was January 6th:
I used transits for September, although school may start in August in Phoenix -

His natal Mercury conjuncts Etamin: 27 Sagittairus, (which is also the Galactic Center), often connecting one with the "greater Collective of consciousness) Perhaps his studies will eventually take him there.

In the “right eye of the Dragon”, gamma Draco has a Saturn-Jupiter nature with Martian influence. According to tradition, the Saturnian predominance will give a liking for solitude. Good mental concentration. Dishonor and downfall and loss of prestige. Esoteric and philosophical studies. [Fixed Stars and Their Interpretation, Elsbeth Ebertin, 1928, p.74, under Ettanin]

SUN CONJ. VEGA: (THE LYRE) often called a lucky star to have in your natal chart-as it helps give a person some musical acumen etc as mentioned, a "more developed nature":


Influences: “According to Ptolemy Lyra (a musical instrument) is like Venus and Mercury. It is said to give an harmonious, poetical and developed nature, fond of music and apt in science and art 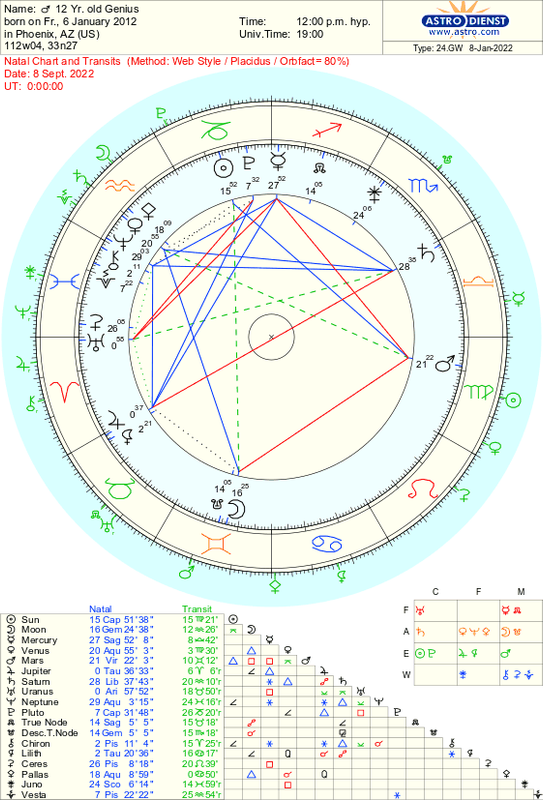 Frisiangal said:
Hi,
Through a passion for medical astrology, I have a shoot-off side interest in charts on the diagnosed autism scale, which began when studying the effect and relationship of MEAN Black Moon Lilith lilth with physical dis-orders and dis-ease. Over the years I have accumulated a small collection of 70 charts from private individuals, internet astro. forum exchanges, and excluding those of the famous in the Astrodatabank of Astro. com.

What has been observed personally is that a Mercury link is present in all cases. Usually yet not always in harsh aspect. I guess this would depend upon one's personal mental outlook towards its societal place (Saturn) and whether it is bothered or unconcerned by it (MEAN BML).
Yet differences have been observedm according to the diagnoses on the autism pectrum.

Autism, as a diagnosed disorder in itself, has shown more than would be considered average harsh aspects between Moon, Mercury, Saturn, and Uranus. There is a link between one with another, sometimes all four connected with each other.
IMOOsamenor is correct in saying that the planet does not necessarily have to be in its ruling sign; it's their inter-connection aspect that seems to be decisive.
The harsh Moon would relate to the 'disconnection from feeling/emotional bonding',
Mercury would relate to the mental thought flow,
Saturn for the strict disciplinary order maintained throughout,
Uranus for the alternative manner of mental perception (electrical wiring - neurology?).

Spectrum diagnoses do not include all 4 planets linked together in some way, but (also) forming separate aspects to other planets.

What has been commonly observed:
ADD:
Mercury in harsh aspect to Mars is apparent,
Neptune (the attention deficit) forms a harsh aspect that is linked to Mercury.

ADHD sees the inclusion of a harsh aspect with Mars (brain activity) and Jupiter (the H of the disorder?)

Asperger's syndrome can include a harsh aspect to Pluto.

These are in no way conclusive in themselves. The 'research' of counter-checking with same data charts of those who do not have autism spectrum disorders has never been undertaken.

Hi, i want to give you my natal chart
F

Sailorlaura said:
Hi, i want to give you my natal chart
Click to expand...