Are there any indicators of meeting your soulmate or twin flame?

Are there any indicators of meeting your soulmate or twin flame looking at natal chart? I'm interested of meeting either or 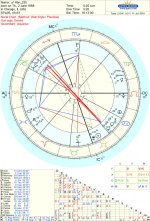 Any input from anyone?
H

Hi. We could do a synastry chart and see how well we match up. that's the only advice I can give you. I'm looking for my soulmate as well

hbn_235 said:
Are there any indicators of meeting your soulmate or twin flame looking at natal chart? I'm interested of meeting either or

I'm not going to say this is guaranteed but I am rather keenly supportive of as for the fact that I am pretty sure I met my actual soul mate some 16 years ago. We got romantically involved for a short time My meeting her led to a book I wrote and managed to get published. In that book I identify her as only "Miss X" for her privacy
I have been working with an excellent clairvoyant for the last 12 1/2 years and I did ask Her if my conclusions on the matter were correct and it was one of the few rare times that she gave me a bit of an ambiguous answer, an "I think so" and a ""you might be right"...

The renowned 20th century American clairvoyant, Edgar Cayce explained in a reading for someone that like Adam and Eve we each have another half to our own soul and each soul that has been split has a half that will almost always incarnate and reincarnate as a male and the same is said of the other half towards that of the feminine. It's very rare that a soul transmigrates and is reincarnated as a member of the opposite sex and only happens for good reason. Cayce also said that we shouldn't go looking for the other half of our soul as we will most often find that person to be someone that is not to our liking.

Cayce also said that the two halves of the same soul that became the Adam and Eve, or Ish and Isha in Hebrew, was then reincarnated as Miriam and Yeshu'a (Mary and Jesus) and also divulged that it is only a mother giving birth to a son that possesses the other half of her own soul that can be born from a virgin.

KEYNOTE: Identification in bipolar relationship with the impersonal rhythm of natural energy.

The symbol for Phase 4 pictures a man and a woman in love walking together. At this new and more mentally stimulated level of experience and consciousness, a third factor appears: the serpent, whose coiling represents the spiral-like process of evolution - not merely 'sex' according to the maker of cathartic symbols, Sigmund Freud. We can understand this 'triangular' image — man, woman and the serpent — if we relate it to the preceding one in the series, the unexploded bomb of the anarchist or activist. The urge to blow up some structure which somehow has become in the activist's mind a symbol of the Establishment — the ruling elite — is usually the protest of an alienated and often immature mind that refuses relationship, because in the relationship he would occupy a subservient position. In this symbol, the serpent represents the acceptance of relationship by the two polarized human beings.
There must be a polarization before there can be fulfillment. The tragedy of so many contemporary lives is that, having become sharply individualized, the men and women cannot find their truly matching polar-opposite. Because they are not fulfilled at the root level of human emotions and vitalistic forces, they pass their lives seeking the ideal complement, often glamorized as the "soul mate." This search can find its expression at several levels. At the mystical level we have the examples of the 'spiritual marriage' of Saint Francis of Assisi and Santa Clara, or recently of Sri Aurobindo and Mother Mira.
The Adam and Eve story (in Hebrew, Ish and Isha - much more significant names!) refers to this principle of polarization, although the story has been turned upside down by priestly intellects to serve their purposes. Adam and Eve accepted the Presence, not of the Tempter, but of the Individualizer, who sought to have them born out of the womb of unconscious passivity to Nature's God. But the result of the experience frightened them. They 'hid'; they failed in the great test of individualization, and in this sense the archetype of that failure is deeply imbedded in man's generic unconscious. It is repeated time after time.
Modern 'individuals' are confronted with another test, but they do not understand its meaning. It is the test of polarized conscious participation in the evolutionary process - a polarization that could dissolve alienation, isolation and egocentricity. In a sense at least, this was the old Tantric concept in India; but today many young people accept the concept only superficially and miss its real essence. They cannot understand the meaning of entering into the serpent, i.e. of developing eonic consciousness and that transpersonal living which once was characterized by the words: Not I live, but Christ lives me - Christ, whose symbolic number in Gnosticism is 888.

At this fourth stage of the third five-fold sequence, we are confronted with an image suggesting the transpersonal way to the 'cosmification' of desire and the conscious acceptance of polarization as the solution of the problems generated by individualization. But this need not mean what is currently meant by "sex" and the glorification of the orgasm. It implies rather the RITUALIZATION OF RELATIONSHIP."

I am of a rather determined view that ones true soulmate, in a composite natal chart, will always produce a composite Venus in the 14th degree of Aries. I also have a strong hunch that, as for true soulmates, the womans' natal Lilith will share the same Sign and degree as the man's natal Moon.
A