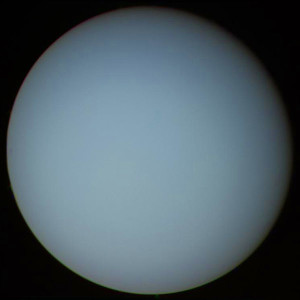 To be Uranian, you’ll usually have a strong natal Uranus, one that is at a critical or anaretic degree, is conjunct your natal Sun, Moon, or an angular house cusp, is in the1st house, is a singleton, the most or least aspected planet in your natal chart, or is the apex planet of a t-square. You may also seem a bit Uranian with lots of natal planets in Aquarius or in the 11th house, the sign and house that Uranus naturally rules.

Strong Uranus in the natal chart can make you quite the personality. You can stand out from the crowd, and people can view you as out there and a little zany, but you don’t mind that so much. Uranus wants to be its own person and do its own thing. The absolutely last thing Uranus wants is to be inauthentic. You can be fiercely independent (especially if you also have lots of Aries, 1st house, or a prominent Mars), and no one can tell you who to be, what to do, or where to go in life. You’ll be you, not matter how different that may be. You can embrace change, push boundaries, and find wonder in stepping outside of your comfort zone. You may seem out of bounds at times, a revolutionary, with an eye to the future and what will be. That may scare some people, but not you.

The downside of a strong Uranus is you can often have difficulty finding your place. You may feel like you don’t belong anywhere, and while you don’t want to be put in a box or made to conform to other people’s standards, you do want to have your place in the world. This energy can leave you feeling like an alien at times. But Uranus is ruler of groups, friends, and like-minded people, so you need to find your tribe in order to thrive, your group of people who support you in your endeavors and support your originality.

Some of you may act as though you don’t care, are aloof to the idea of needing to find your place, but deep down, you’re usually scared that no one will ever understand you and you’ll never fit in anywhere, so you can put on a facade that you don’t want that to mask the fear. You don’t want to be called a “freak” or made to be an outcast, moving through life alone.You need to allow yourself to be open enough to find the people who appreciate your quirks, love your flaws, and have some of the same outlandish ideas of traits. Knowing that you’re not alone can be crucial for you.

Once you can get through that, you can use Uranus to your advantage, and be seen as an inspiration to others to be true to themselves, and someone who challenges the old social norms that need to be broken so we can move confidently into the future, and you can lead us down the paths that we never would’ve thought of, but are everything we dreamed.

2 Responses to “Being Uranian”